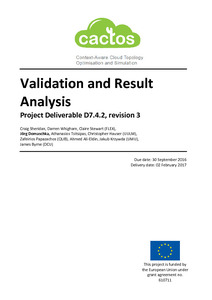 This document describes the validation of the CACTOS software components. This validation has been completed in two iterations. The first iteration aimed to deliver a current validation of the CACTOS Runtime tools as they were available at that time. The second iteration contained in this document presents the validation of the final iteration of the CACTOS tooling. These tools are validated within multiple use case scenarios. For each scenario in CACTOS (Business Analytics, Scientific Computing and Cloud Application) a set of validation “scenarios” have been discussed and detailed to the point where they can be applied to the concrete technical solution and deployment. By the end of the project scenarios from all stakeholders detailed within this document have either been fulfilled or partly fulfilled. The validation results have been defined in two iterations: • First iteration is reported in deliverable D7.4.1 at PM 18 and was used to derive future actions. • Second iteration is reported in this deliverable D7.4.2 at PM 36, with respect to future commercialisation. The document consists of five chapters out of which three cover the validation process: Defining the goals that the software should meet, validation of individual tools and validation by use case. What is new in this document compared to its predecessor D7.4.1 and D7.3.2 is that validation scenarios have also been defined for the virtual middleware integration components. The document ends by bringing together all results for a final conclusion.

Except where otherwise noted, this item's license is described as CC BY-ND 4.0 International