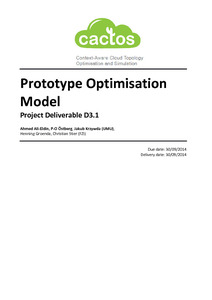 This deliverable outlines a first prototype version of the optimisation model used in CactoOpt, the CACTOS infrastructure optimisation tool. The purpose of this deliverable is to demonstrate interfacing of the optimisation model with preliminary characterization templates describing workloads and infrastructures, i.e. model representations of cloud application workloads (describing virtual machine deployment, configuration, and load) and the data centre (hardware) resources they are executed on. This deliverable additionally shows the integration of CactoOpt in the overall architecture of CACTOS and discusses use cases and optimisation capabilities supported by the first CactoOpt prototype. CactoOpt is designed using a sensor-actuator model where the optimisation engine’s view of the surrounding world is captured in a set of infrastructure topology and load models (sensors) and the actions the optimisation engine can use to affect data centre resources (actuators) are represented using an optimisation plan language (describing a set of infrastructure actions recommended to optimise data centre layout and operation). The model does not assume that all recommended optimisation actions are immediately taken, but rather views these as a set of recommendations the optimizer gives to an external party (e.g., a virtualisation middleware integration implementation or a systems administrator) as part of a greater optimisation plan. This document describes CACTOS deliverable D3.1 – a prototype optimisation model designed for use in CactoOpt. As described in this document, the CactoOpt tool is one of the three main tools in the CACTOS toolkit and this document is related primarily to two other CACTOS year 1 deliverables: CACTOS deliverable D5.2.1 - CACTOS Toolkit Version 1 (2014) that describes the overall design and architecture of the toolkit, and CACTOS deliverable D5.1 - Model Integration and Supporting Tooling (2014) that details the construction of infrastructure topology and workload models and the integration of the different tools in the toolkit based on these models.