Synaptic pathways related to Shank3 and its interaction partner ProSAPiP1 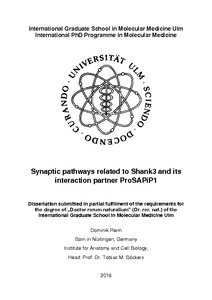 Autism spectrum disorders (ASD) affect approximately 1% of the human population. The underlying mechanisms for disease formation and pathology have been addressed in many studies. Due to the high complexity of ASD, however, these mechanisms are still not completely understood. The three SHANK genes are frequently mutated in ASD patients with the highest contribution of SHANK3. Mutations in SHANK3 are causing several neuropsychiatric diseases including Phelan-McDermid syndrome, ASD and intellectual disability. Many studies investigated molecular alterations in Shank3 mutant mouse models. However, a comprehensive approach analysing an unbiased set of proteins has not yet been performed in Shank3 mutant mouse models. In this study, we established a new protocol to isolate the postsynaptic density (PSD) fraction from mouse brain tissue. Applying this protocol, we generated striatal and hippocampal PSD fractions of wild type and Shank3Δ11-/- mutant mice to compare the molecular setup of their PSD. Therefore, we performed ion-mobility enhanced data-independent label-free LC-MS/MS on the isolated PSD fractions to obtain an unbiased and comprehensive dataset of molecular changes in vivo in striatal and hippocampal PSD fractions lacking the major isoforms of Shank3. In the absence of these Shank3 isoforms, we identified brain region specific molecular alterations in the PSD, indicating disruptions in striatal glutamatergic synaptic transmission, while in the hippocampal PSD of Shank3Δ11-/- mutant mice mainly cytoskeleton-associated functions and processes were affected. Postsynaptic Homer1 was the only protein found significantly altered in both brain regions. We observed reductions in Homer1 in both brain regions, which are in line with previous observations in Shank3Δ11-/- and other Shank3 mutant mouse models. Our study is the first comprehensive analysis of brain region specific PSD proteomes of Shank3 mutant mice. We provide information on Shank3Δ11-/- mutant PSD composition, which will be important for further Shank3 based studies and pharmaceutical treatment experiments. Furthermore, we investigated functional aspects of ProSAP-interacting protein 1 (ProSAPiP1), a member of the Fezzin protein family and interaction partner of Shank3 and Spine-associated RapGAP (SPAR) with yet unknown function. We virally knocked down and overexpressed ProSAPiP1 to analyse functional consequences in primary hippocampal neurons. While general synapse numbers and the protein levels of main PSD scaffold proteins Shank3 and PSD95 were not altered, we observed that ProSAPiP1 regulates the postsynaptic protein levels of its interaction partner SPAR. In line with previously described consequences of alterations in postsynaptic SPAR protein levels, we observed an impact of ProSAPiP1 protein levels on dendritic spine maturation. Our results therefore suggest that ProSAPiP1 regulates SPAR levels to modulate dendritic spine maturity.