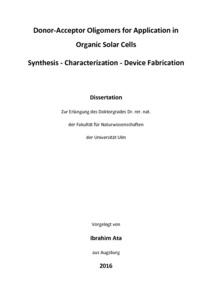 The aim of this work is the synthesis of novel, structurally-defined, and D/A-substituted oligothiophenes for utilization as donor material in solution-processed bulk-heterojunction solar cells (BHJSC). Furthermore, the focus of this work will not only be set on the structure-property relationships of the synthesized oligomers, gained through thorough analytical investigations, but also on elucidating valid structure-device property relationships. Therefore, different conceptual approaches concerning the molecular architecture should be applied. The first approach will be based on a previous project dealing with the synthesis of a series of oligothiophenes consisting of an A-D-A system comprising a central dithieno[3:2-b:2',3'-d]pyrrole (DTP) donor moiety end-capped by electron-withdrawing 1,1 dicyanovinylene (DCV) units which solely differed in the alkyl-substitution pattern. In this respect, the structure of the best-performing oligomer of the series, which was synthesized during my master thesis, should be further improved in terms of the alkyl-substitution pattern, in order to improve the resulting film microstructure in the bulk-heterojunction and thus, reach higher PCE in solution-processed BHJSC. Furthermore, the electronic structure of the A-D-A scaffold should be modified by the replacing the DCV acceptor moieties by 1-(1,1-dicyanomethylene)-cyclohex-2-ene (DCC) units, in order to shift the absorption towards longer wavelength for an enhanced light harvest. Thereafter, the optical and electronic properties should be investigated using UV vis spectroscopy and cyclic voltammetry, respectively. The implementation into solar cells will be accompanied with thorough optimization of all fabrication aspects, especially of the SVA treatment. The second approach will focus on the design and synthesis of A-D-A-D-A-type oligothiophenes based on a previously developed oligomer comprising thieno[2,3-c]pyrrole-4,6-dione (TPD) as core acceptor, endowed with two electron-donating DTP moieties, and end-capped with DCV units. A series comprising different core acceptor motifs, as well as an elongation of the π-system with hexyl-substituted bithiophene spacers is planned. After investigation of the optoelectronic properties and the influence of the different structural modifications on the molecular properties, suitable candidates will be tested as donor materials in BHJSC. In the course of the solar cell fabrication, all optimization possibilities will be exploited.