The role of linear ubiquitination in toll-like receptor 3 signalling 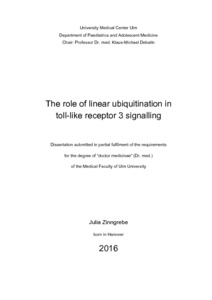