The role of microRNA in FOXO1 repression in classical Hodgkin Lymphoma 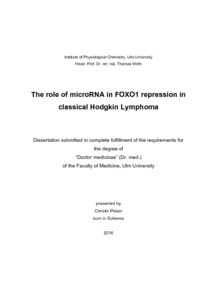 Recently, our team identified FOXO1 to be a tumor suppressor in classical Hodgkin Lymphoma (cHL). Its tumor suppressive activities arise from its function as transcription factor regulating the expression of various genes involved in cell cycle and apoptosis. Our previous studies showed that FOXO1 is downregulated in cHL by diverse mechanisms including dysregulated AKT and ERK signaling, as well as chromosomal aberrations. Re-introduction of FOXO1 leads to cell cycle arrest and apoptosis in cHL cell lines. Within the last couple of years increasing evidence suggested that altered microRNA expression is associated with various disease states, such as cancer. In this study, we show that FOXO1 is repressed by miR-96, miR-182 and 183 in classical Hodgkin Lymphoma. These three miRNAs are differentially expressed in cHL cell lines, functional experiments using a luciferase reporter assay confirm that the these miRNAs specifically target the 3'UTR of FOXO1 and the application of specific anti-miRs leads to an increased level of FOXO1 protein for all three miRNAs. MiR-96, miR-182 and miR-183 are located in very close genomic proximity to each other, sharing the same transcription start site and thereby leading to a cooperative repression of the tumor suppressive transcription factor FOXO1. However, our data was obtained from only EBV negative cHL cell lines. Another study has shown that the EBV derived protein LMP1 downregulates the miR-183/96/182 cluster, which in turn could mean that our findings might only apply for EBV negative cases (approx. 60%). Novel therapies pursue the goal of targeting oncogenic miRNAs. Therefore, the miR-183/96/182 cluster could possibly be a suitable target for new therapy approaches in cHL.