Choosing a surgical access point for hysterectomy : a paradigm shift over a 10-year span 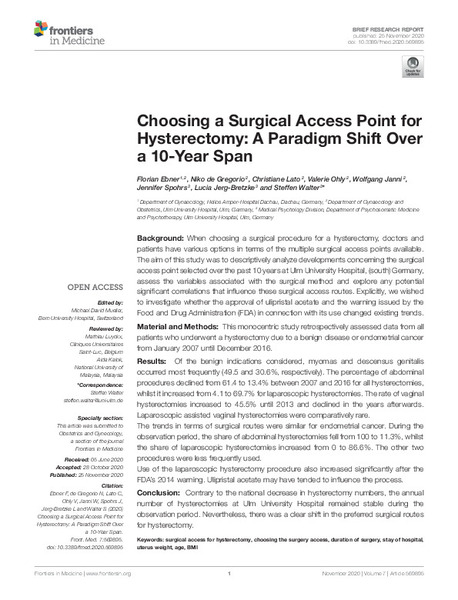 Background: When choosing a surgical procedure for a hysterectomy, doctors and patients have various options in terms of the multiple surgical access points available. The aim of this study was to descriptively analyze developments concerning the surgical access point selected over the past 10 years at Ulm University Hospital, (south) Germany, assess the variables associated with the surgical method and explore any potential significant correlations that influence these surgical access routes. Explicitly, we wished to investigate whether the approval of ulipristal acetate and the warning issued by the Food and Drug Administration (FDA) in connection with its use changed existing trends. Material and Methods: This monocentric study retrospectively assessed data from all patients who underwent a hysterectomy due to a benign disease or endometrial cancer from January 2007 until December 2016. Results: Of the benign indications considered, myomas and descensus genitalis occurred most frequently (49.5 and 30.6%, respectively). The percentage of abdominal procedures declined from 61.4 to 13.4% between 2007 and 2016 for all hysterectomies, whilst it increased from 4.1 to 69.7% for laparoscopic hysterectomies. The rate of vaginal hysterectomies increased to 45.5% until 2013 and declined in the years afterwards. Laparoscopic assisted vaginal hysterectomies were comparatively rare. The trends in terms of surgical routes were similar for endometrial cancer. During the observation period, the share of abdominal hysterectomies fell from 100 to 11.3%, whilst the share of laparoscopic hysterectomies increased from 0 to 86.6%. The other two procedures were less frequently used. Use of the laparoscopic hysterectomy procedure also increased significantly after the FDA's 2014 warning. Ulipristal acetate may have tended to influence the process. Conclusion: Contrary to the national decrease in hysterectomy numbers, the annual number of hysterectomies at Ulm University Hospital remained stable during the observation period. Nevertheless, there was a clear shift in the preferred surgical routes for hysterectomy.