“Our patients are different”: predictors of seclusion and restraint in 31 psychiatric hospitals 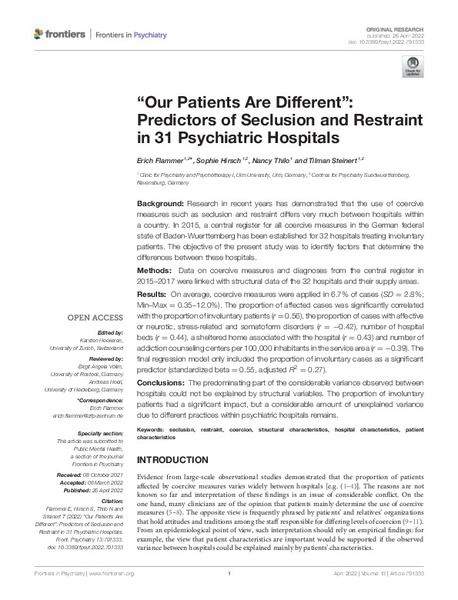 Background: Research in recent years has demonstrated that the use of coercive measures such as seclusion and restraint differs very much between hospitals within a country. In 2015, a central register for all coercive measures in the German federal state of Baden-Wuerttemberg has been established for 32 hospitals treating involuntary patients. The objective of the present study was to identify factors that determine the differences between these hospitals. Methods: Data on coercive measures and diagnoses from the central register in 2015–2017 were linked with structural data of the 32 hospitals and their supply areas. Results: On average, coercive measures were applied in 6.7% of cases (SD = 2.8%; Min–Max = 0.35–12.0%). The proportion of affected cases was significantly correlated with the proportion of involuntary patients (r = 0.56), the proportion of cases with affective or neurotic, stress-related and somatoform disorders (r = −0.42), number of hospital beds (r = 0.44), a sheltered home associated with the hospital (r = 0.43) and number of addiction counseling centers per 100,000 inhabitants in the service area (r = −0.39). The final regression model only included the proportion of involuntary cases as a significant predictor (standardized beta = 0.55, adjusted R2 = 0.27). Conclusions: The predominating part of the considerable variance observed between hospitals could not be explained by structural variables. The proportion of involuntary patients had a significant impact, but a considerable amount of unexplained variance due to different practices within psychiatric hospitals remains.