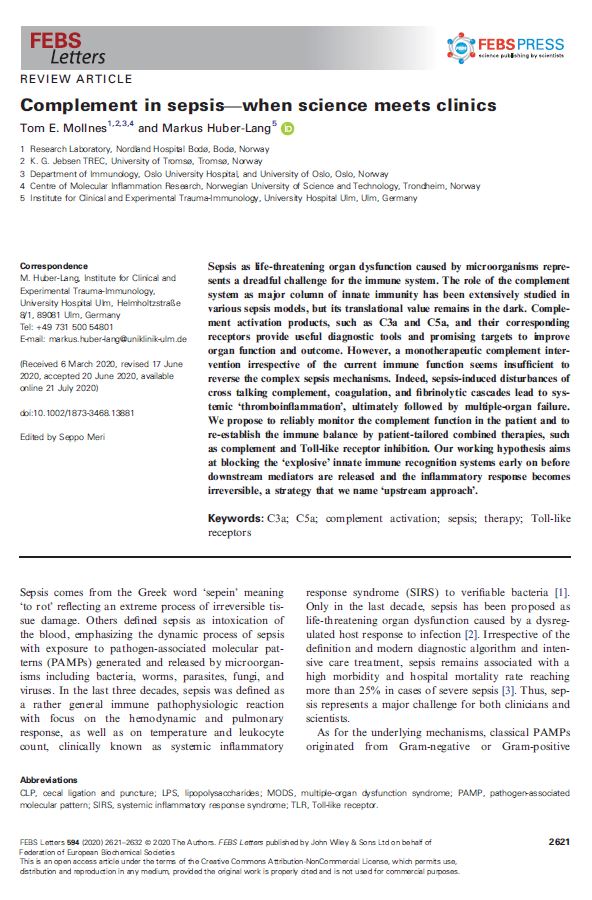 Sepsis as life‐threatening organ dysfunction caused by microorganisms represents a dreadful challenge for the immune system. The role of the complement system as major column of innate immunity has been extensively studied in various sepsis models, but its translational value remains in the dark. Complement activation products, such as C3a and C5a, and their corresponding receptors provide useful diagnostic tools and promising targets to improve organ function and outcome. However, a monotherapeutic complement intervention irrespective of the current immune function seems insufficient to reverse the complex sepsis mechanisms. Indeed, sepsis‐induced disturbances of cross talking complement, coagulation, and fibrinolytic cascades lead to systemic ‘thromboinflammation’, ultimately followed by multiple‐organ failure. We propose to reliably monitor the complement function in the patient and to re‐establish the immune balance by patient‐tailored combined therapies, such as complement and Toll‐like receptor inhibition. Our working hypothesis aims at blocking the ‘explosive’ innate immune recognition systems early on before downstream mediators are released and the inflammatory response becomes irreversible, a strategy that we name ‘upstream approach’.