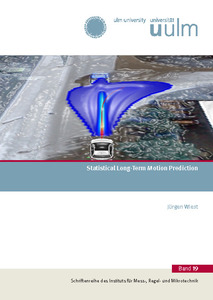 The prediction of an object’s future motion has traditionally been solved by applying kinematic or dynamic state-space models which describe the object’s motion as the evolution of its state over time. These models perform fairly well for short-term predictions but become either highly complex, inaccurate, or even systematically prone to failure if the task is long-term motion prediction. In an effort to generate an accurate estimate of an object’s future motion, this work investigates a statistical approach to facilitate learning an implicit motion model from previously observed samples. A motion sample is expressed as a mixed-feature variable and comprises information on the object’s kinematics as well as its relation to the immediate environment. In general, prediction is accompanied by uncertainty. For motion prediction, the probability of an estimate and especially its spatio-temporal uncertainty is of great interest. Further, the algorithm must be capable of dealing with multimodalities in ambiguous situations. In this thesis, a forecasting methodology based on an approximation of the joint probability density function (PDF) between the past and future motion is developed in which the prediction is treated in a rigorous statistical manner. Mixtures of distributions provide a sophisticated way to approximate unknown distributional shapes of highly complex multimodal PDFs arbitrary well. In order to work with mixed-feature variables, the component distributions are composed of a multivariate Gaussian and a factorized multivariate Bernoulli distribution. Using the convex combination of these non-normal component distributions, it is shown that the model is capable of capturing correlations between the mixed-feature variables. To overcome the disadvantages of a maximum likelihood (ML) parameter inference, a novel Bayesian extension in which all parameters are given prior distributions is presented – the variational Bayesian Bernoulli-Gaussian mixture model (VBBGMM). Bayesian modeling avoids overfitting, prevents singularities, facilitates the integration of prior knowledge and, moreover, automatically determines the model complexity. Parameters are estimated by variational inference, an analytical approximation of the posterior distribution. This thesis defines the VBBGMM and derives all essential equations (i.e., the variational parameter inference, the variational lower bound, the posterior predictive density, its conditional density, and its marginal density). The VBBGMM forecasting methodology is applied to long-term motion prediction. Instead of a single or multiple motion hypotheses, the algorithm estimates an entire PDF over the space of future motion of which concrete predictions can be evaluated. The mixed-feature component distribution facilitates the integration of a broad variety of diverse input and output signals (binary, categorical, scalar, and function curves). Depending on the definition of the output variables, the prediction can consist of maneuver probabilities or trajectory hypotheses, each associated with a spatio-temporal uncertainty. Further, a novel representation where the predicted future motion is modeled as complete spatio-temporal PDF is derived. Because every intersection has some special characteristics that affect driving behavior, a combination of a general model and intersection-specific models is presented. This combination significantly improves the prediction performance in combination with an online learning extension of the VBBGMM. All different types of output variables are evaluated in real world intersection scenarios. The maneuvers of oncoming vehicles at an intersection are analyzed using a categorical output. Further, the intersection-specific model extension is evaluated for this scenario as well. Continuous motion prediction is considered for the ego vehicle where both the trajectory-based output representation as well as the complete spatio-temporal PDF are evaluated.