A wave equation interpolating between classical and quantum mechanics 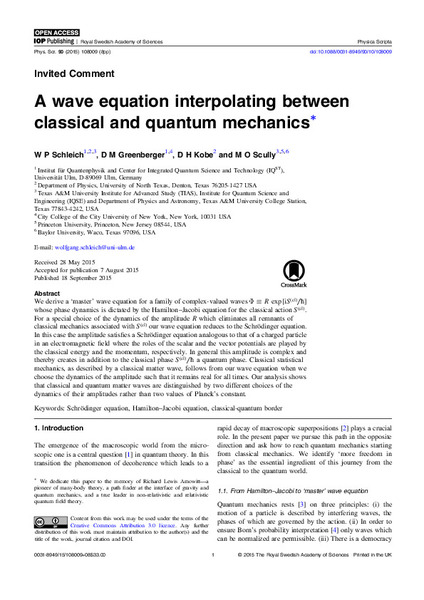 Abstract We derive a ‘master’ wave equation for a family of complex-valued waves whose phase dynamics is dictated by the Hamilton–Jacobi equation for the classical action . For a special choice of the dynamics of the amplitude R which eliminates all remnants of classical mechanics associated with our wave equation reduces to the Schrödinger equation. In this case the amplitude satisfies a Schrödinger equation analogous to that of a charged particle in an electromagnetic field where the roles of the scalar and the vector potentials are played by the classical energy and the momentum, respectively. In general this amplitude is complex and thereby creates in addition to the classical phase a quantum phase. Classical statistical mechanics, as described by a classical matter wave, follows from our wave equation when we choose the dynamics of the amplitude such that it remains real for all times. Our analysis shows that classical and quantum matter waves are distinguished by two different choices of the dynamics of their amplitudes rather than two values of Planck’s constant.