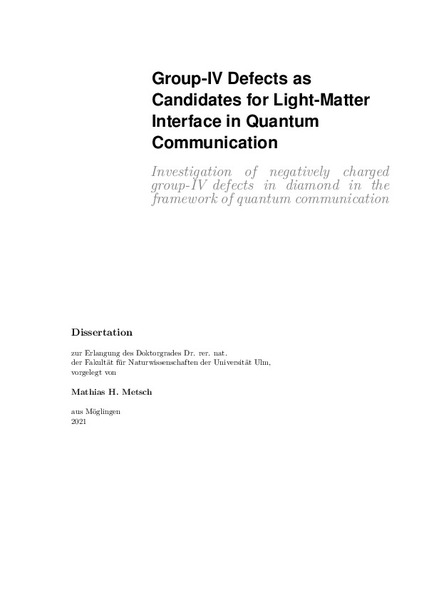 The work presented in this thesis is aiming towards the development of methods to use color centers in diamond as quantum repeater nodes. As a quantum system, the negatively charged nitrogen vacancy center (NV) is a well established system. The low flux of coherent photons produced by a single NV is the main limitation for its employment as a quantum repeater node. To improve the flux of coherent photons, a different group of color centers, based on chemical elements of the IV chemical group are studied. All of these color centers share the same physical structure, consisting of a foreign atom in a interstitial lattice position combined with a split vacancy. The negatively charged silicon vacancy (SiV) first is well known for its optical stability and a high output of coherent photons. However, even at cryogenic temperatures, the coherence properties of SiV are orders of magnitude inferior to NV. In this thesis, two different routes to improve these coherence properties are investigated. In the first part, other group-IV defects, the negatively charged germanium vacancy (GeV) and the negatively charged tin vacancy (SnV) are spectroscopically investigated. In one of the first investigations of GeV it could be shown that GeV shares the beneficial optical properties of SiV. It offers a higher flux of coherent photons in an even narrower optical transition, which makes GeV superior as a light-matter interface. Spectroscopic measurements of SnV revealed that it also shares the general energetic structure of all negatively charged group-IV defects. The much larger spin-orbit coupling of SnV rises hopes that its coherence properties could be an improvement over other group-IV defects at temperatures around 2 K. However, the optical properties were not sufficient to investigate any potential improvement of its electron spin coherence. In the second part, the use of hybrid system, consisting of a SiV coupled to a nuclear spin of a nearby 13C atom of the diamond lattice is investigated. Methods to precisely control the SiV electron spin by means of a microwave field are developed. Achieving full coherent control of the SiV electron spin allows to detect and manipulate coupled nuclear spins. A protocol to polarize and control an individual coupled 13C spin is developed and implemented. Using the SiV/13C hybrid system, a coherence time of more than 6 ms could be realized. This represents an improvement of three orders of magnitude compared to a solitary SiV electron spin operated at the same temperatures.