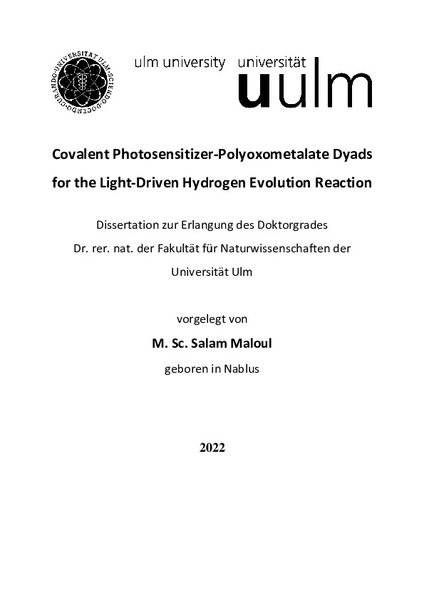 Anderson Polyoxometalates dyads were synthesized, characterized and tested as a potential photocatalysts for Hydrogen Evolution Reaction. One principle project focuses on POM-photosenstizer dyads. A minute changes in the POM-photosenstizer dyad including the central atom of the POM or the linkage between the POM and photosensitizer caused variation in the catalytic activity for the hydrogen evolution reaction. Upon variation of the central metal for the POM different amount of the charge separated state generated in the different dyads. This lead to the conclusion that the yield and not only the lifetime of the charge separated state determines the catalytic capacity of the dyads. In a second study for the same project another variation was considered, in this case the linkage between the photosensitizer and the POM was varied. In one case the linkage was a C-C bond and in the other it’s a C=N bond. Variation of the linkage structure results in major changes of the Photophysical properties and deactivation pathways which could be one of the factors controlling the catalytic activity. The other major project present a Polyoxometalates supramolecular dyad consisting of two platinum complex hydrogen evolution catalyst covalently attached to an Anderson polyoxometalates. Supramolecular electrostatic coupling of the system to an iridium photosensitizer enables visible light-driven hydrogen evolution. A combination of theory and experiment demonstrated the multifunctionality of the polyoxometalates. The POM in this system acts as photosensitizer / catalyst-binding-site and facilitates light-induced charge-transfer and catalytic turnover. Increased hydrogen evolution reactivity is achieved by chemically altering the Pt-catalyst site. Mechanistic studies reveal the roles of different components and provide a molecular knowledge of the relationships that control stability and reactivity. The system could serve as a model for energy conversion and storage using multifunctional polyoxometalates.