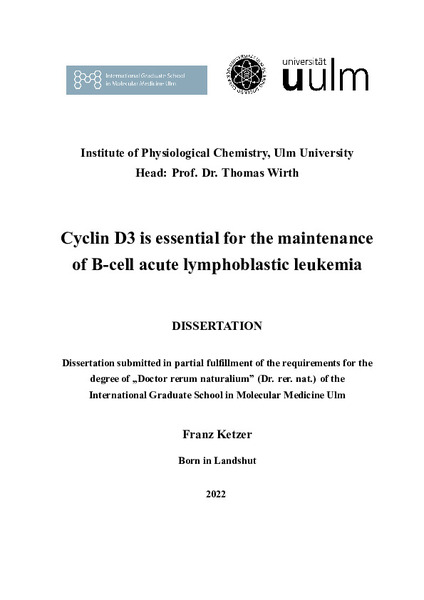 D-type Cyclins are a well-known and important part of the cell cycle machinery. Interfering with the cell cycle by inhibiting their associated kinases CDK4/6 has been actively studied for decades. These efforts have been successful in certain malignancies, such as breast cancer, but remained futile in B-ALL. Our group has previously shown that down-regulation of FOXO1 leads to a decrease of CCND3 expression, which by itself is toxic to B-ALL cells. This finding came as a surprise, since CCND2 has been previously regarded as the most important D-Cyclin in B-ALL, being a direct transcriptional target of MYC. Intriguingly, targeting CCND3, which by itself is not catalytically active, widely regarded as redundant to other D-Cyclins, and works in a holoenzymatic complex with CDK4/6, has not been explored in B-ALL before. Hence, I set to investigate two main questions: First, how CCND3 is regulated by FOXO1 and second, how the down-regulation of CCND3 exerts cytotoxic effects in B-ALL. First, I conducted data mining of publicly available gene expression data derived from B-ALL patients, observing that CCND3 is the highest expressed D-type Cyclin throughout all major genetic subgroups of B-ALL. Next, I aimed to elucidate the underlying mechanism of CCND3 activation by FOXO1 using a BCR-ABL1+ Foxo1fl/fl murine B-ALL model, luciferase reporter assay, EMSA and ChIP. Employing these methods, I indeed observed binding and activation of the CCND3 promoter by FOXO1. Based on our group’s previous observations of cytotoxic effects by CCND3 knockdown in two B-ALL cell lines, I used a second shRNA against CCND3 to confirm this in more, genetically diverse subgroups of B-ALL. Both shRNAs proved to be toxic in all cell lines tested, inducing cell cycle arrest and apoptosis. I confirmed the growth-inhibitory effects of CCND3knockdown by additionally employing CRISPR/Cas9 and shRNAs in a murine BCR-ABL1-transformed B-ALL model and three PDXs of different underlying driver mutations and treatment histories. Interestingly, these effects could not be replicated by treating the cells with the clinically used inhibitor of CCND3-associated kinases CDK4/6, palbociclib. Although both treatments induced cell cycle arrest, only knockdown of CCND3 but not CDK4/6 inhibition induced apoptosis in B-ALL cells. Since the available literature suggested CDK-independent effects of Cyclins, I conducted RNA-sequencing of three B-ALL cell lines of different genotypes either after treatment with palbociclib or after CCND3 knockdown. I subtracted the differentially expressed genes of both groups, which resulted in a compact list of genes that were exclusively regulated after CCND3 knockdown but not after CDK4/6 inhibition. This list included CDK8, which has been shown to fulfill essential functions in BCR-ABL1+ B-ALL. First, I confirmed on protein level that CDK8 is exclusively down-regulated after CCND3 knockdown but not after treatment with palbociclib. Furthermore, the shRNA-mediated knockdown of CDK8 in BCR-ABL1- B-ALL cells induced apoptosis. I concluded that CDK8 is an essential gene for the survival B-ALL of different mutational backgrounds, which is regulated by CCND3. Conclusively, my work presents a mechanistic basis for the regulation of CCND3 by FOXO1, demonstrates an essential role of CCND3 in all major subtypes of B-ALL and provides insight into CDK4/6-independent functions of CCND3 that culminate in the regulation of the essential gene CDK8.