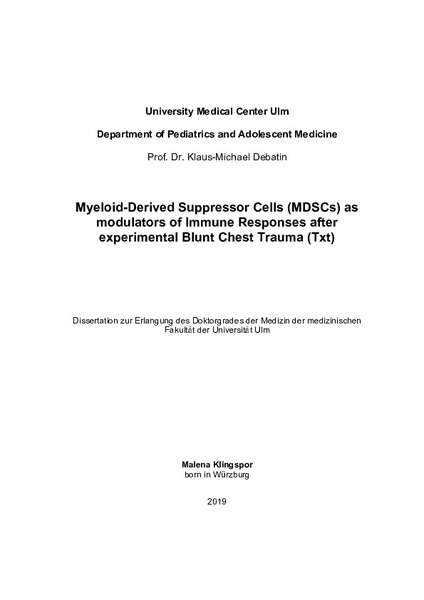 Traumatic injuries account for more years of life lost than other pathologies such as cancer or heart disease. Blunt chest trauma (Txt) is a frequent injury in poly-trauma patients and negatively impacts morbidity and mortality. Late trauma deaths are often attributed to complications such as sepsis and multiorgan failure (MOF), which can occur as a consequence to an immune imbalance following trauma. When trauma patients fail to restore immunohomeostasis, treatment options remain limited due to a lack of understanding of underlying mechanisms. Therefore, it is of crucial importance to analyze changes in cell populations regulating immune functions. Myeloid-derivedsuppressorcells (MDSCs) have been shown to act as immunosuppressive cells in studies mostly concerning cancer, but also expand in other conditions that lead to chronic inflammation such as traumatic injuries including Txt. However,it remains unclear whether the presence of MDSCs is beneficial or detrimental for the host in the context of trauma immune responses. Therefore, we adoptively transferred in vitro-generated bone marrow derived MDSCs to further clarify their functions in the context of Txt. MDSCs were generated with the help of granulocyte macrophage colony stimulating factor (GM-CSF) and transferred into the mice shortly before Txt. Since many trauma patients suffer from long-lasting immunosuppression after their injuries,we analyzed the effect on T cell functions until 1 week after transfer. Surprisingly, the adoptively transferred MDSCs do not exhibit immunosuppressive functions after Txt, but rather act immunostimulatory. MDSCstransferred before Txt travel via the blood stream, preferentially home to the spleen and are undetectable in the injured lung. Spleens of MDSC-treated animals strongly increase in cell numbers, while invading MDSCs are not the reason for increased splenocyte numbers since they only contributed to up to 2% of the cells. MDSCs strongly increase T cell numbers in the spleen however without altering the composition of different T cell subpopulations. MDSC transfer not only promotes T cell expansion but also induces an activation of T cells. T cell activation markers such as CD25, CD44, CD69 and CD122 are increased after adoptive transfer of MDSCs. Most interestingly, T cells from MDSC-treated mice proliferate in culture without any further activation signal. This intrinsic activation of T cells, however, does not abrogate their ability to respond to further activation signals, since T cells from MDSC-treated Txt mice exhibit similar proliferation ratios after stimulation compared to T cells from untreated Txt mice. Although MDSCs are reported to influence the TH1/TH2 balance, we did not observe an influence of the in vitro-generated MDSCs on the polarization of T cells in Txt mice. All together these results show for the first time, that adoptively transplanted MDSCs in the context of Txt exhibit a rather immune activating than suppressive function and might counteract trauma-induced T cell malfunctions without impeding the TH1 response required to prevent post-traumatic infections and support tissue regeneration.