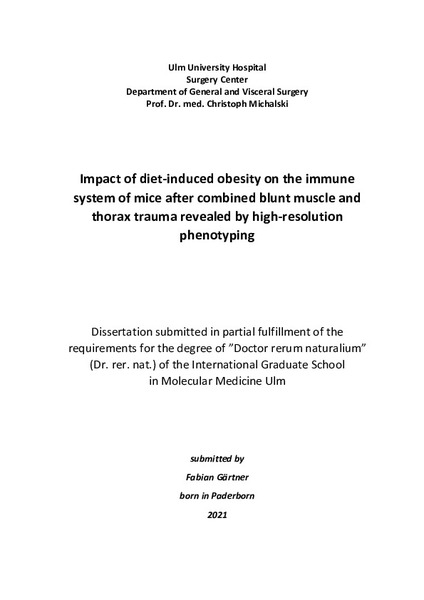 Obesity as a state of chronic inflammation has been shown to alter and influence the immune response. Due to the increasing prevalence of obesity, it is crucial to understand the ongoing alterations and modifications of the immune system to provide better care options for obese patients. The study presented in this thesis elucidated the implication of DIO on the immune response after a combined muscle and thorax trauma in vivo mainly utilizing regular flow cytometry and the novel mass cytometry. Mechanistically, an effect of DIO that could be revealed during this study is an attenuated splenic response to stimulation through the vagus nerve as part of the inflammatory reflex, likely contributing to the observed prolonged initial inflammation phase in obese mice. This is suggested by data demonstrating a reduction of ChAT+ CD4+ T cells in the spleen of obese mice accompanied by a reduced responsiveness to nicotine treatment after lipopolysaccharide stimulation, which should result in a diminished TNF-α production of splenic macrophages. Generally, a prolonged inflammation phase could be described in obese mice which is characterized by enhanced numbers of circulating neutrophils as well as increased percentages of pro-inflammatory CCR2varCX3CR1+CD62L+Ly6Chi monocytes in obese mice. Furthermore, increased cytokine levels are detectable in the periphery of obese mice, further promoting a pro-inflammatory environment and contributing to an enhanced pro-inflammatory response to the combined trauma. These described changes in the periphery, especially the shifts to inflammation in the monocyte compartment, influence immune cell migration to the inflamed tissues. These changes result in an impairment of the switch of pro-inflammatory M1 to regenerative M2 macrophages in the lung of obese mice. Besides phenotyping immune cells, non-immune cells were analyzed in the muscle showing a lacking expansion of highly proliferative, fibrogenic Sca-1hiCD90- fibro/adipogenic progenitors as a response to the trauma in obese mice, which is in accordance with previously published gene profiling results achieved with the same mouse model during preceding research. Furthermore, an expansion as well as activation of satellite cells was evident in the traumatized muscle of both lean and obese mice indicating a comparable regenerative effort of these stem cells. The overall implications of diet-induced obesity are graphically represented in figure 33. Even though, translatability of the mouse model to the human has not been shown to full extent, first steps were taken and an enhanced pro-inflammatory response to a polytraumatic injury was observable in overweight polytrauma patients by an increased IL-6/IL-10 ratio. Furthermore, shifts in the immune response phases were detected in overweight compared to normal weight polytrauma patients. These shifts were apparent based on analyzing the cytokine profile in the plasma of these polytrauma patients. These results offer new working hypothesis regarding the implication of obesity on the human immune response that can be focused on in future studies (figure 34). Based on these results, several new potential treatment options can be suggested that could be utilized in trauma care as well as other comorbidities caused by obesity. Especially, the idea of attenuating inflammation by interfering with the inflammatory reflex offers a huge potential regarding future treatment options starting at the pathophysiology of obesity as well as during trauma care. The procedure of artificial stimulation through the vagus nerve can be achieved by non-invasive devices, a method that already has been approved as a medical contraception in Europe. Furthermore, observations regarding an impaired switch of M1 to M2 macrophages in the lung of obese mice offers new therapeutic approaches. Interfering with the impaired switch of M1 to M2 macrophages in the lung could provide possibilities to reduce the implication of acute respiratory distress syndrome development in obese patients after lung injury. This procedure would also focus on attenuating the inflammatory response by facilitating and anti-inflammatory phenotype of M2 macrophages. The results gained in my thesis show a disturbance of the monocytic compartment during the early immune response to the trauma, as well as a weakened response of the spleen to the inflammatory reflex caused by diet-induced obesity. Interfering with these two major implications of diet induced obesity on the immune system, offers novel treatment options to provide better care for obese trauma patients.