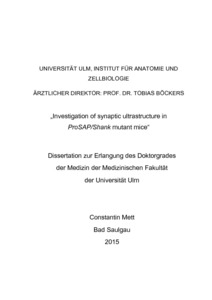 ProSAP/Shanks are considered to be the master organizing proteins of the postsynaptic densities (PSDs) of excitatory glutamatergic synapses in the central nervous system. Autism spectrum disorders (ASD) patient cohort studies revealed that in almost 1% of patients one of the ProSAP/Shank genes was mutated. To assess the consequences of ProSAP/Shank mutations, the PSDs of two different animal models, ProSAP1/Shank2 knockout and ProSAP1/Shank2-ProSAP2/Shank3 double-knockout mice, were examined upon its morphology in ASD associated brain regions, particularly the dorsomedial and dorsolateral striatum, the hippocampal CA1 and CA3 region as well as the molecular and granular layer of the cerebellum. In these brain regions distinct PSD parameters were analyzed for changes. As PSD parameters, the PSD density, width of the synaptic cleft, PSD length, thickness and volume were examined. The most striking results were obtained in the dorsolateral striatum. Within this striatal sub-region the PSD composition was significantly altered in double-knockout mice. While the PSD length was reduced by 24% and the PSD thickness by 13%, the calculated PSD volume was even reduced to 49% of those in wild-type littermates. In the dorsomedial striatum, as well as in the hippocampal CA1 region a significant change of the PSD length of about 20% was obtained. The other brain regions did not present any significant changes in any measured PSD parameter in the double-knockout mutants. In addition, the ultrastructural analyses of the PSD in ProSAP1/Shank2 mutant mice did not show any significant morphological changes of the PSD. These findings might probably highlight the dorsomedial and dorsolateral striatum as well as the hippocampal CA1 region as key areas considering morphological aspects in autism spectrum disorders caused by ProSAP/Shank mutations.