Epidemiology and ecology of virus and host: bats and coronaviruses in Ghana, West Africa 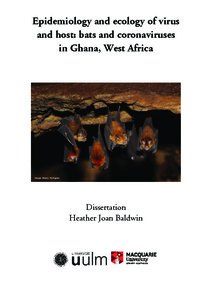 Bats are implicated in the emergence of many zoonotic diseases, including the coronaviruses (CoVs) responsible for deadly outbreaks of severe acute respiratory syndrome (SARS) in 2002- 2003, and Middle East respiratory syndrome (MERS) which first emerged in 2012. Despite an increased interest in bat CoVs since the SARS epidemic, little research has examined bat CoVs from a disease ecology perspective. In this thesis, I investigated the epidemiology and ecology of CoVs and bats that host them in Ghana, West Africa. This thesis is presented in two parts. In the first part, I examined CoV epidemiology in bats in Ghana. I captured bats at several colonies regularly over two years. Samples were screened for CoVs, which were found to be widespread in insectivorous cave-dwelling bats of the genera Hipposideros and Nycteris. A novel CoV related to MERS-CoV was detected at high prevalence in slit-faced bats, Nycteris cf. gambiensis, supporting suggestions of a bat origin of MERS-CoV. I examined population and individual-level risk factors for infection with four CoVs in Nycteris cf. gambiensis, Hipposideros abae, and H. cf. ruber. I found a strong seasonal effect on CoV infection rates, and a strong association with age, whereby juvenile bats are at greater risk of infection, as well as evidence for higher risk with low body condition. These findings provide new insights into the ecological, demographic and temporal processes that influence CoV infection dynamics in bats, with implications for public health management to prevent virus spillover to humans and domestic animals. In the second part of my thesis, I examined cryptic speciation and genetic and acoustic diversity in CoV host species, Hipposideros caffer and H. ruber. Using mitochondrial DNA and microsatellite loci, and acoustic and morphological data, I showed that mitochondrial DNA clades represent distinct species, with no evidence of interbreeding between groups. I then used mitochondrial sequence data to date lineage divergence, and explore the historical and evolutionary processes that may have given rise to diversity in these taxa. Further, I characterised spatial patterns of intraspecific genetic diversity in the three species corresponding to H. cf. ruber (H. sp. B, C, and D). Comparison shows stark contrasts in the spatial patterns of genetic variation of these species, despite them having diverged relatively recently and apparently having highly similar ecological and natural history traits. I discuss the implications of these results for disease surveillance and spread, the use of surrogate species in wildlife management, and the evolutionary processes that generate and maintain diversity. The findings of this thesis add to knowledge of bat CoV ecology and epidemiology, as well as to the evolution and patterns of diversity within a relatively widespread, but understudied, group of Afrotropical bats that are natural CoV hosts. The results are discussed in the context of zoonoses, wildlife management and disease prevention, and the evolution of cryptic speciation in bats.