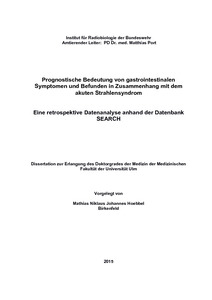 The following thesis explores the prognostic significance of gastrointestinal symptoms and diagnoses in relation to acute radiation syndrome. This is a retrospective analysis based on the SEARCH (System of Evaluation and Archiving of Radiation Accidents based on Case Histories) database, which was created by a team of researchers in Ulm in 1998. The SEARCH database compiled health status data of individuals involved in a total of 78 ionized radiation accidents between 1945 and 2003. In the past changes in bloodbuilding systems were considered the defining factor in determining a prognosis regarding survival times. Treatment decisions were made in line with these findings, including stem-cell transplants. In recent history, especially after the nuclear disaster in Chernobyl in 1986, the focus shifted onto other organ systems. As a result it has been proven that significant cutaneous damages present an important influence on survival regardless of haematopoiesis. Several researchers have looked at changes in the gastrointestinal tract and possible correlations with radiation induced multiple organ failure. In this paper, all of the data recorded in SEARCH in regards to gastrointestinal symptoms have been analyzed. These include symptoms such as nausea, vomiting and changes in bowel movement as well as their onset and severity. Radiation-induced oral mucositis was also further investigated. Despite the occasional gaps in data in SEARCH, results from the analysis proved that the occurrence of certain symptoms, their severity and their onset were directly correlated to life expectancy, regardless of the dose estimation, and the pending blood test results. An immediate triage of these patients by skilled medical professionals is imperative to accurate categorization.