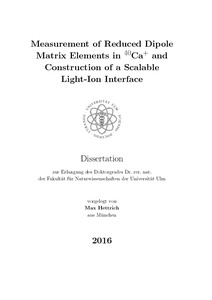 In the first part of this thesis, a method for determining transition dipole matrix elements is introduced. It combines measuring absorptive and dispersive atom-light interactions off-resonant to the transition in question and is thus resilient against various line-broadening effects. A single 40Ca+ ion confined in a Paul trap is used for implementing that method. Rather than counting individual photons, the method is based on discriminating atomic states of the ion’s level scheme, which circumvents many systematic error sources affecting other methods. The dipole matrix elements of the 42S1/2 ↔ 42P1/2, the 42S1/2 ↔ 42P3/2 and the 42P1/2 ↔ 32D3/2 transitions are determined. Moreover, the method allows also for the deduction of the radiative lifetime of the 42P1/2 state which reads 6.904(26)ns. This value is in agreement with recent theoretical calculations, and resolves a long-standing discrepancy between calculated values and experimental results. In the second part of the thesis, the design, construction, assembly and characterization of a segmented, microstructured Paul trap which can accommodate a fiber cavity for light-ion interaction is described. The trap features 31 segments, which allow for ion transport along the trap axis. Vertical interconnect accesses needed to be incorporated in the design of the conducting paths in order to electrically connect all segment electrodes to the outside. The trap is fabricated from alumina substrates and evaporatively coated with gold. To further characterize the trap, simulations of axial trap frequencies have been compared with measured values for different regions in the trap, also axial transport of single ions over a distance of ≈ 2.5 mm has been implemented. Coherent dynamics on the quadrupole transition of 40Ca+ have been used to perform sideband cooling and a single ion was cooled below the Doppler limit. The dynamics of carrier and red sideband transitions have been employed to measure the trap’s heating rate, which amounts to n = 16.5/ms at a trap frequency of 2π × 1.32 MHz.