Analysis and fitting of random tessellation models: applications in telecommunication and cell biology 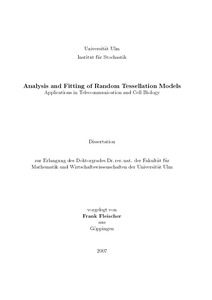 This thesis has been motivated by two ongoing research projects of the Institute of Stochastics at Ulm University. In the first project it is dealt with the modelling and the analysis of network structures that occur in the field of telecommunication. In particular street systems but also telecommunication networks on nationwide scales are analysed with respect to their geometrical structures and cost characteristics connected to them. In the second project intracellular structures in human cells are analysed. In particular, network structures formed by the cytoskeleton are investigated with respect to their, both geometric and random, nature. Purposes of this thesis are to develop and describe efficient algorithms for the simulation of the typical cell for different types of tessellation models; to perform such an efficient cost analysis based on two-level hierarchical models; to generally discuss some possible software tests with respect to implementations that occur, with a special regard to the fact that implementations in this context often have a random input or output; to show some useful techniques and methods from morphological image analysis in order to preprocess given image data such that a later statistical analysis is made possible; to perform such a statistical analysis for two examples from cell biology where samples from the cytoskeleton are investigated. Here, apart from a basic statistical examination, especially a model fitting algorithm for random tessellation models is of interest; to show by all the points given above that the techniques and tools from stochastic geometry and image analysis that have been applied are quite universal in the sense that they can be used in various fields with problems that have a scale ranging from macroscopic to microscopic or even to nanoscopic.