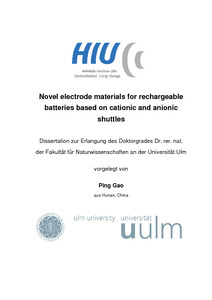 Ever-growing energy needs and the environmental issues arising from the combustion of fossil fuels demand a stronger use of renewable energy sources and the development of sustainable storage technologies. Batteries are widely used in the various energy storage applications, but their storage capabilities are regarded as limited at the moment. Moreover, high costs and sustainability issues on the long term make the development of alternative systems based on sustainable resources more and more attractive. The planned worldwide introduction of electric vehicles and grid-scale renewable energy storage raises grand challenges to develop systems with high energy density, long cycle life, high safety and low cost of the batteries. In this regard, novel electrode materials for rechargeable batteries based on different ionic shuttles have been investigated in this doctoral thesis. The experimental chapters concentrate on the following four parts: rechargeable batteries based on anionic shuttle, i.e., chloride ion batteries (in the first and second part); rechargeable batteries based on both cationic and anionic shuttles, i.e., organic-based batteries (in the third part); and rechargeable batteries based on cationic shuttle, i.e., Li-ion and Na-ion batteries (in the fourth part). In the first part, a rechargeable chloride ion battery (CIBs) using vanadium oxychloride (VOCl) cathode, Li anode and chloride ion conducting liquid electrolyte was investigated. An initial discharge capacity of 189 mAh g-1 was observed at a current rate of 130 mA g-1. A capacity of 113 mAh g-1 remained after 100 cycles at 2 C rate with a coulombic efficiency of 98 %. The reaction mechanism of the VOCl electrode was studied in detail by electrochemical tests, ex-situ X-ray diffraction (XRD), X-ray photoelectron spectroscopy (XPS), infrared spectroscopy (IR), and transmission electron microscopy (TEM). It was revealed that the VOCl interlayers were expanded in the initial discharge, and the expanded structure facilitated the chloride ion exchange in the subsequent cycling. In the second part, magnesium (Mg) based materials were introduced as anodes in the CIB, in which the VOCl material worked as a cathode. Composite of Mg powder with carbon black (MC) and a mixture of magnesium chloride, Mg and carbon black (MMC) were tested as anodes. The VOCl cathode can be charged while VOCl2 is formed and discharged to VO when coupled with an MMC anode, delivering two discharge plateaus at around 1.9 and 1.3 V in the first cycle. The VOCl electrode delivered a reversible capacity of 101 mAh g-1 at a current density of 10 mA g-1 after initial 9 cycles. The third part of the thesis deals with an organic-based rechargeable battery using a porphyrin complex of [5,15-Bis(ethynyl)-10,20-diphenylporphinato]copper(II) (CuDEPP) as a new electrode-active material. Due to the bipolar redox property of the CuDEPP, both cations and anions of the electrolyte shuttled during the reaction, enabling the transfer of four electrons per CuDEPP formula unit. The CuDEPP could be used as a cathode, as anode, or both cathode and anode in the organic cells. Using a lithium metal anode, the CuDEPP cathode delivered an initial discharge capacity of 210 mAh g-1 at a current density of 200 mA g-1 between 4.5 V and 1.8 V. When coupled with a graphite cathode, a high specific power density of 14.4 kW kg-1 was achieved for the CuDEPP anode at a high current density of 10 A g-1. In a symmetric cell, it also demonstrated highly reversible charge and discharge behavior. In the last part, a high performance electrode was developed for Li-ion (LIB) and Na-ion batteries (SIB) which are based on a multi-electron reaction. The layered VOCl electrode was investigated for both cells. The number of the transferred electrons varied when the working window was changed. The VOCl electrode in LIB delivered first discharge and recharge capacities of 1228 mAh g-1 and 759 mAh g-1 at a current density of 100 mA g-1 in a voltage range of 3.0 - 0.05 V (vs Li/Li+), respectively, which corresponds to 2.8 Li per VOCl formula unit. A discharge capacity of 120 mAh g-1 was obtained for SIB at a 0.5 C rate in a voltage range of 1.0 - 3.0 V (vs Na/Na+). The reaction mechanism of the VOCl electrode for LIB and SIB was systematically investigated. The results of this thesis suggest that the migration of chloride ions can be fast using a VOCl material as a cathode in chloride ion batteries, and both Li and Mg based materials can serve as the anode. High rate capability, and long-term cycle stability of energy storage devices could be built using organic based rechargeable batteries shuttling of both positive and negative ions. In addition, developing of conversion based materials for rechargeable batteries is also of great importance in order to increase the energy density.