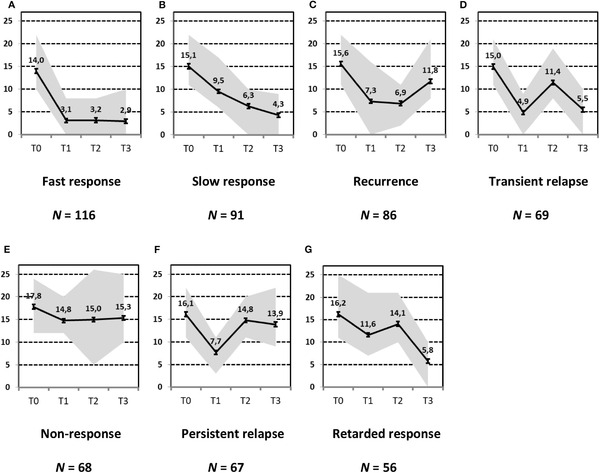 Aim of the study was to identify patient variables that predict specific patterns of symptom course during and after hospital treatment for major depressive disorder (MDD). In a sample of 518 patients, four pairs of clinically relevant patterns of symptom change were contrasted. The time points of measurement were admission, discharge, 3 and 12 month after discharge. CATREG was used to identify the best sets of predictors from 28 variables. A greater reduction in self-criticism during hospital treatment was the strongest predictor of rapid and sustained improvement. Traumatic childhood experiences and lower abilities for communication with others predicted a transient relapse after discharge, while a co-morbid personality disorder and higher level of anxiety differentiated between those with a persistent relapse and those with only a transient relapse in depressive symptoms following discharge. Overall, patients with less severe depression at admission, better abilities in self-perception, and less self-criticism (baseline and/or greater reduction during treatment) showed a better outcome after 1 year. There is limited generalizability to other countries and treatment settings. Data on personality functioning were not available for all patients and findings are correlational in nature. However, findings are in support of a psychotherapeutic focus on a reduction of self-criticism in MDD. Patient with traumatization, a co-morbid personality disorder and lower abilities to communicate their emotional needs should get specific attention and support after discharge from hospital treatment.