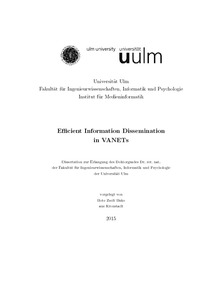 VANETs represent a promising approach to realize novel applications by exchanging information between vehicles over a wireless medium. Primarily safety applications are counted among them, which intend to increase the road safety by avoiding dangerous situations. For example, vehicles located at the end of a traffic jam could warn approaching vehicles. A driver of such a car could register the situation in time, even without line of sight and avoid a rear-end collision accident. Furthermore, there are a number of other VANET applications, e.g. applications intended to make driving more efficient or so called business and entertainment applications. This variety of applications impose different requirements onto the communication system: So for example, applications which inform arriving vehicles about a hazardous situation, typically need to address multiple cars located in a geographic region. Furthermore, many applications need to disseminate messages over multiple hops, to favorably reach also distant vehicles. In order to facilitate such applications possibly with several million of network participants, besides the diversity of application requirements also non-functional requirements must be considered by such communication systems. Due to the multitude of envisioned applications for VANETs, it would be unfeasible to analyze protocols one by one by considering application requirements. Therefore, the first contribution of this work is a classification of VANET applications by considering their purpose and network layer properties. This way, communication protocols can be analyzed by considering only a few key requirements, but which stand for a whole group of applications. Based on this, this work presents several so called communication patterns, which are the building blocks of the communication system to support the applications of the identified classes. The examined applications reveal the importance of the dissemination of information to several destinations by so called broadcast messages. If such messages are relayed via multiple hops, this kind of information dissemination is a challenging task, especially in the presence of high dynamic network characteristics as is the case in VANETs. This thesis reveals, that conventional approaches are inadequate for the realization of such broadcast protocols in VANETs. Based on these findings, the main contribution of this work is the introduction of novel broadcast protocols, designed for the efficient information dissemination in VANETs. These so called hybrid broadcast protocols combine the advantages of different protocol classes, at the same time eliminating - or at least alleviating - their weaknesses. For the comparison extensive simulations were done, which clearly show the superiority of the proposed protocols over classical approaches, especially in the presence of high network densities and high mobility of vehicles. Therefore, these are promising novel information dissemination protocols designed for VANETs, meeting the diversity of applications' requirements and varying network conditions. Consequently, this thesis is a fundamental and important contribution to make driving more safe, efficient and entertaining through wireless ad-hoc communication between vehicles.