A paired comparison between glioblastoma cancer stem cells and differentiated cells in view of proliferation, resistance to conventional therapies and tumour-initiating capabilities 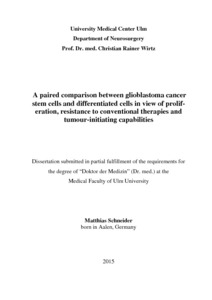 Geared to further investigate whether some of the frequently postulated perceptions concerning the so-called concept of cancer stem cells would also be valid in case of glioblastoma, this study was underlain by comparative experiments on matched pairs of glioblastoma cancer stem cells (GCSCs) and their adherent, differentiated progeny (Gds). Thereby, putative free-floating GCSCs isolated from three human tumour specimens predominantly exhibited positive staining for the stem cell marker nestin as well as - after switching culture conditions towards differentiation - adherent nestin-negative tumour cells occurred that proved to mainly express the mature astrocyte marker glial fibrillary acidic protein (GFAP). In keeping with the idea of quiescent and slow-cycling CSCs, all three GCSC populations have been shown to contain a large percentage of barely proliferating cells, whereas within two of them a marked unsynchronised growth pattern revealed a highly dividing subpopulation that did not lag behind the quantity of cell divisions of differentiated counterparts. Despite observed disparities of proliferation that are commonly regarded as key to the efficacy of radiochemotherapy which mainly targets rapidly-cycling cells, GCSCs did not feature lower DNA-fragmentation rates in response to administration of temozolomide or exposure to radiation when measured 120 h after treatment. Having found no clear differences in cell death sensitivity, we therefore investigated the expression of key mediators of treatment-induced apoptosis. Among others protein expression of pro-apoptotic B-celllymphoma- 2 (BCL-2) family players detected for GCSCs clearly surpassed that of adherent glioblastoma cells. Inverse findings were present in case of anti-apoptotic family members. Taken together these data suggest that, while sensitivity towards apoptotic stimuli was not fundamentally different between GCSCs and Gds, the cell populations seemed to follow different survival strategies on a molecular level. Subsequently, tumour-intiating capabilities of one matched pair of glioblastoma cells were analysed in an orthotopic mouse model revealing obvious tumour formation for both injection of conjectural GCSCs and differentiated glioblastoma cells even when transplanted at low cellular multiplicities. As tumour formation initiated by a less number of tumour cells was considered the most generally accepted distinguishing feature of CSCs and the remaining tumour cells, our results obtained from transplantation assays seemed to harbour doubts on this view in the context of glioblastoma. Finally, staining for the stem cell marker nestin revealed positive cells even in cases of tumours initiated by transplantation of adherent GFAP-positive tumour cells. These findings suggest the idea of a cell-type plasticity in the sense of a bidirectional interconversion between GCSCs and non-stem tumour cells, whereupon differentiated tumour cells might undergo dedifferentiation to generate a more progenitor (cancer stem cell) state.