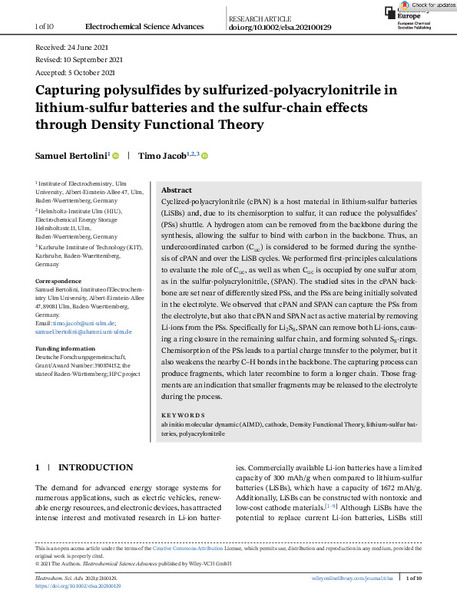 Cyclized-polyacrylonitrile (cPAN) is a host material in lithium-sulfur batteries (LiSBs) and, due to its chemisorption to sulfur, it can reduce the polysulfides’ (PSs) shuttle. A hydrogen atom can be removed from the backbone during the synthesis, allowing the sulfur to bind with carbon in the backbone. Thus, an undercoordinated carbon (Cuc) is considered to be formed during the synthesis of cPAN and over the LiSB cycles. We performed first-principles calculations to evaluate the role of Cuc, as well as when Cuc is occupied by one sulfur atom, as in the sulfur-polyacrylonitrile, (SPAN). The studied sites in the cPAN backbone are set near of differently sized PSs, and the PSs are being initially solvated in the electrolyte. We observed that cPAN and SPAN can capture the PSs from the electrolyte, but also that cPAN and SPAN act as active material by removing Li-ions from the PSs. Specifically for Li2S8, SPAN can remove both Li-ions, causing a ring closure in the remaining sulfur chain, and forming solvated S8-rings. Chemisorption of the PSs leads to a partial charge transfer to the polymer, but it also weakens the nearby C–H bonds in the backbone. The capturing process can produce fragments, which later recombine to form a longer chain. Those fragments are an indication that smaller fragments may be released to the electrolyte during the process.