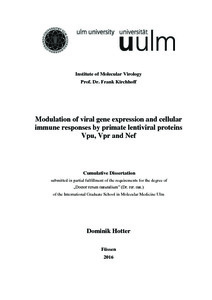 Coevolution of primate lentiviruses and their host species is fueled by a continuous arms race, in which the host’s immune system induces an antiviral cellular state after sensing of the pathogen, whereas the virus evades recognition or directly counteracts antiviral effector proteins. One of the best-characterized antiretroviral restriction factors is tetherin, which inhibits the release of newly formed progeny virions by physically retaining them at the plasma membrane of the infected cell. After cross-species transmission of simian immunodeficiency viruses (SIVs) to humans, pandemic HIV-1 group M stains switched from Nef- to Vpu-mediated tetherin antagonism. We recently found that viruses from group O, the second most common group of HIV-1, are also able to counteract tetherin. These viruses have evolved their Nef protein to target a conserved region adjacent to a protective deletion that renders human tetherin resistant to SIV Nefs. In contrast, viruses from the rare HIV-1 groups N and P lack efficient tetherin antagonists, suggesting that counteraction of tetherin is a prerequisite for successful viral spread. Analysis of rare non-synonymous polymorphisms in the human tetherin gene, showed that none of them affects the ability of tetherin to restrict virus release or its sensitivity to lentiviral antagonists. However, tetherin also acts as a pattern recognition receptor inducing an antiviral immune response via activation of NF-κB. Interestingly, one of the naturally occurring polymorphisms (R19H) located in the cytoplasmic tail of tetherin abrogated its ability to act as an innate sensor. It is conceivable that group M Vpus and group O Nefs inhibit innate sensing by antagonizing tetherin. We could demonstrate, however, that lentiviral Vpu proteins also directly suppress NF-κB signaling, irrespectively of anti-tetherin activity. NF κB activation plays a complex role in lentiviral replication. On the one hand, it is required for efficient viral gene expression, while, on the other hand, it induces the expression of antiviral factors. We showed that primate lentiviruses cope with these opposing roles of NF-κB by precisely orchestrating its activation. The early protein Nef boosts NF-κB activity to initiate efficient expression of viral proteins, including Tat, which can maintain viral transcription independently of NF-κB. This allows the late protein Vpu to suppress NF-κB-mediated expression of antiviral genes without inhibiting viral gene expression. Furthermore, we found that viruses that do not encode a vpu gene, either use their Nef protein to limit T cell activation by downmodulating the CD3 T cell receptor, or directly inhibit NF-κB using their Vpr protein. The observation that primate lentiviruses have evolved at least three different strategies to inhibit NF-κB activation highlights the importance of this transcription factor in antiretroviral immunity, and illustrates the enormous functional plasticity of primate lentiviral accessory proteins. Since the activation levels of NF-κB also play a crucial role in the establishment of viral latency and reactivation, a better understanding of the regulation of NF-κB activity by primate lentiviral proteins is of high interest. Despite sophisticated mechanisms to escape innate immune sensing and to inhibit downstream signaling pathways, HIV-1 infection causes chronic immune activation resulting in the induction of numerous antiviral host restriction factors. Based on common characteristics of known restriction factors, we performed a genome-wide screen to identify novel antiviral proteins. A surprisingly large proportion of the tested factors showed antiviral properties in transient transfection assays. Guanylate-binding protein 5 (GBP5), specifically reduced the infectivity of progeny virions and was thus selected for in-depth characterization. We found that GBP5 is a key mediator of the antiviral interferon (IFN)-response that reduces the infectivity of progeny virions by interfering with the proper processing and incorporation of the viral envelope (Env) glycoprotein. Furthermore, GBP5 levels determined infectious virus yield from human macrophages, while mutations in the vpu start codon reduced the inhibitory effect of GBP5 by increasing Env expression. Our results therefore identify GBP5 as a novel antiretroviral effector of the IFN-response that is evaded by an unusual trade-off mechanism.