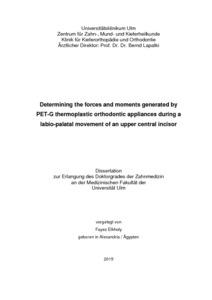 The aim of the study was to quantify the forces and moments applied from thermoplastic appliances on an upper central incisor during a labio-palatal movement, as well the ability to achieve a bodily movement of a central incisor only by using the tested aligners. The experiments were performed using an upper central incisor, separated from a Frasaco® upper dental model. The separated tooth was mounted on a 3D force and moment sensor to record the 3D force and moment components applied during a labio-palatal movement of the measurement tooth. After resetting the tooth in its natural (original) position, an impression was taken and a corresponding plaster model was fabricated. This model was then used to thermoform a set of standardized aligner in different thicknesses according to the respective manufacturer instructions. After seating the thermoformed aligner on the tooth, the tooth was displaced in a labio-palatal direction in 0.01-mm steps to a maximum of 0.5 mm. During the displacements, all 3D forces and moments were recorded. The tested aligners were Duran® (Scheu Dental), Erkodur® (Erkodent), und Track-A® (Forestadent), all of them was made of polyethylene terephthalate glycol-modified (PET-G) with a thickness ranging from 0.5 mm to 0.8 mm. From each thickness and brand, a set of three aligners was thermoformed and with each aligner, the measurement was repeated three times in each direction. The forces determined for an effective palatal displacement of 0.25 mm with the 0.5 mm thick aligners were 3.01 N ±0.07 (Duran®), 5.31 N ±0.89 (Erkodur®) as well as 3.69 N ±0.81 (Track-A®). The forces applied from the 0.75- as well as the 0.8-mm-thick aligners were 4.49 N ±0.16 (Duran®), 7.22 ±0.45 N (Erkodur®) as well as 5.20 ±0.68 N (Track-A®). All aligners showed a generally higher stiffness for the labial direction compared to that for the palatal direction. The high stiffness values calculated for the labial displacement were supposed to be related to the different labial and palatal crown morphology, as well as the location of the tooth-aligner contact point. According to the measured forces and the calculated aligner stiffness, it was clear that the recommended guidelines for the aligner treatment would induce a very high force application. Accordingly, the forces should be reduced, by either reducing the displacement range in each treatment step or using thinner aligner materials while keeping the current displacement range. The calculated moment-to-force ratio ranging between -9.93 mm and -12.22 mm reflected the fact that, aligners without any modification can only induce a labio-palatal tipping movement.