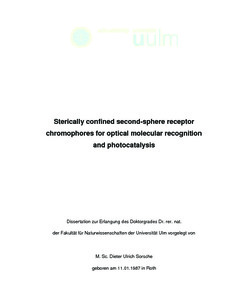 The investigation of molecular processes and interactions through visible light is of fundamental importance for a wide range of technological and biological applications. The chromophores developed in this work have been used as luminescent sensors and light sensitizers for photocatalysis. A particular challenge is the optical detection of biologically abundant anions such as the halides. Simple inorganic ions are ubiquitously found in the environment, but they exhibit no visible interaction with light to be readily detected. A series of new ruthenium(II) chromophores with a hydrogen bond donating bibenzimidazole ligand have been developed in order to bind small ions and to signal the binding event through changes in their visible-light absorption and emission properties. Previous studies have shown that related complexes exhibit vivid color changes in the presence of basic anions as deprotonation strongly alters the electronic properties of these coordination compounds. Interaction with weakly basic anions through hydrogen bond interactions has been observed for example by NMR spectroscopy, the corresponding optical response however remained marginal. Progress has been reported upon introduction of substituents in a manner which defines a sterically confined pocket around the hydrogen bond donor functions. Using a versatile palladium(0) mediated synthetic procedure for variably substituted bibenzimidazole ligands, some new ruthenium(II) chromophores could be synthesized with well-defined binding pockets of varying size and flexibility. In particular, two complexes with anisyl substituents differ structurally only by four methyl groups which enforce a more rigid geometry of the respective binding pocket, whereas the flexible analogue exhibits rotational freedom. Remarkably, both new complexes show unprecedented optical sensitivity towards binding of the weakly basic halide ions chloride and bromide. Comparative investigations with an unsubstituted bibenzimidazole ruthenium(II) complex reveal that the pocket formation leads to dimming of the new chromophores, which is reversed upon anion binding with remarkable sensitivity towards chloride and bromide. These complexes hence represent a promising step forward for the detection of abundant, weakly basic, inorganic anions through optical events. One potential improvement beyond the reported anion studies is the synthetic achievement of a sensor with a macrocyclic binding pocket. An alternative chromophore unit for bibenzimidazole based sensors is based on the strongly luminescent properties of cyclometallated bis(phenylpyridine) iridium(III) complexes. In contrast to its ruthenium based analogue the new iridium(III) bibenzimidazole complex presented in this thesis exhibits vivid emission also in its deprotonated forms which potentially broadens the pH range for luminescence based recognition events. A combined ruthenium(II)/iridium(III) chromophore exhibits an appealing mixture of photophysical features of its subunits. This particular chromophore has hence been probed as sensitizer for light-driven catalysis and proved to be an interesting candidate for photocatalytic hydrogen production from an aqueous solution. For the purpose of detection of metal cations, a new phenanthroline based bridging ligand has been developed which exhibits a second diimine ligand function for 3d metal ion recognition. Due to the sterically demanding substitution pattern, regioselective synthesis of the respective iridium(III) chromophore has been achieved. Binding studies with nickel(II), zinc(II), and copper(I) reveal that only the latter was suitable to access the second binding sphere. The binding event is characterized by a vivid color change and darkening due to luminescence quenching. With respect to electrochemical measurements and in agreement with literature it is suggested that the selectivity for copper(I) potentially corresponds to a redox process which allows rearrangement and binding of the reduced diimine receptor sphere. In summary, chemically and structurally versatile new second-sphere receptors are presented in this thesis. The synthetic concepts allow a modular variation of photocenters and the corresponding photophysical properties, and binding modes for either anions or cations can be altered by the choice of bridging units. The reported supramolecular recognition and sensitization studies are promising and pave the way for the further development of molecular luminescent sensors with tunable selectivity and photochemistry.