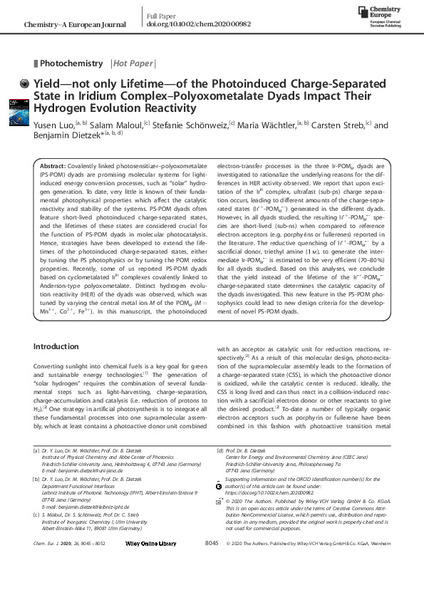 A mechanistic study on the distinct hydrogen evolution reactivity (HER) of three cyclometalated IrIII complex–polyoxometalate (Ir‐POMM) dyads. Their HER activity was tuned by modifying the central metal ion M of the POMM. The lifetime or the yield of Ir.+‐POMM.− determined the different HER activity of Ir‐POMM (see figure). Covalently linked photosensitizer–polyoxometalate (PS‐POM) dyads are promising molecular systems for light‐induced energy conversion processes, such as “solar” hydrogen generation. To date, very little is known of their fundamental photophysical properties which affect the catalytic reactivity and stability of the systems. PS‐POM dyads often feature short‐lived photoinduced charge‐separated states, and the lifetimes of these states are considered crucial for the function of PS‐POM dyads in molecular photocatalysis. Hence, strategies have been developed to extend the lifetimes of the photoinduced charge‐separated states, either by tuning the PS photophysics or by tuning the POM redox properties. Recently, some of us reported PS‐POM dyads based on cyclometalated IrIII complexes covalently linked to Anderson‐type polyoxometalate. Distinct hydrogen evolution reactivity (HER) of the dyads was observed, which was tuned by varying the central metal ion M of the POMM (M=Mn3+, Co3+, Fe3+). In this manuscript, the photoinduced electron‐transfer processes in the three Ir‐POMM dyads are investigated to rationalize the underlying reasons for the differences in HER activity observed. We report that upon excitation of the IrIII complex, ultrafast (sub‐ps) charge separation occurs, leading to different amounts of the charge‐separated states (Ir.+‐POMM.−) generated in the different dyads. However, in all dyads studied, the resulting Ir.+‐POMM.− species are short‐lived (sub‐ns) when compared to reference electron acceptors (e.g. porphyrins or fullerenes) reported in the literature. The reductive quenching of Ir.+‐POMM.− by a sacrificial donor, triethyl amine (1 m), to generate the intermediate Ir‐POMM.− is estimated to be very efficient (70–80 %) for all dyads studied. Based on this analyses, we conclude that the yield instead of the lifetime of the Ir.+‐POMM.− charge‐separated state determines the catalytic capacity of the dyads investigated. This new feature in the PS‐POM photophysics could lead to new design criteria for the development of novel PS‐POM dyads.