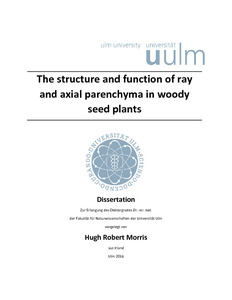 Parenchyma represents an important interconnected three-dimensional living tissue in secondary xylem of woody seed plants, with functions ranging from transport and storage to defence and biomechanics, along with less understood functions, such as in long-distance water transport. We lack a large-scale analysis of ecological traits associated with ray parenchyma (RP) and axial parenchyma (AP). Here, we explore global trends in the AP and RP fraction per cross-sectional wood area based on literature data, including 1,727 entries from three major biomes (temperate, subtropical and tropical). We found a 29-fold variation in RAP fraction, where temperature was found to be the biggest driver of RAP (RP+AP) levels, followed by precipitation, with the latter showing a significant but negative relationship with RAP, demonstrating an increase in RAP towards drier sites. RAP fractions were higher in tropical than temperate angiosperm trees (21.1 vs 36.2 %), respectively, where AP was found to be the most versatile parenchyma type resulting in the sharp rise of RAP in the tropics, while RP remained relatively constant. Succulents (including pachycauls) and lianas were found to have higher RAP fractions than non-succulent angiosperm trees and conifers, with the latter having the lowest RAP fractions, as expected. The observed trends were interpreted with respect to the various functions of RAP in plants. We tested one of the hypotheses arising from the global analysis, and found RAP or/and ‘living’ fibres levels in a range of temperate species to be the uppermost limit for NSC storage, demonstrating that species with higher RAP and/or living fibre fractions in the selected species have a greater capacity for carbon storage: the same trend was not found for lowland tropical species. Also, starch accumulation was equally distributed across both RP and AP (including contact cells) in most of the temperate species analysed at the onset of winter, a trend not observed in the tropical species, where, although evident, the distribution was far sparser, with the exception of Brosimum sp. In summary, our results form a strong basis in which to better understand the functional implications of the great anatomical variability in wood parenchyma.