Role of microRNA-27a-5p and -3p in human adipocyte biology 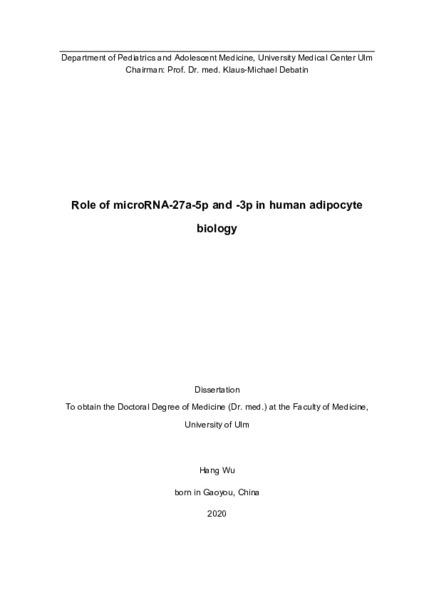 This study investigated the role of miRNAs in WAT tissue of mice either fed with normal diet (ND) or high fat diet (HFD). The expression of the miR-27a genes (miR-27a-5p and -3p) was up-regulated both in gonadal and inguinal WAT after HFD. In SGBS cell and human primary cell, the expression of miR-27a-5p and -3p was down-regulated upon adipogenic differentiation. This data suggests that the miR-27a-3p is potentially an important class of negative regulators of adipogenesis and may play a role in the regulation of adipose functions associated with obesity. This was confirmed by gain-of-function experiments, in which miR-27a-3p led to a robust and specific inhibition of adipogenic differentiation with the blockade of PPARγ, perilipin, and adiponectin expression, as well as reduced triglyceride and lipid droplets. miR-27a-5p did not show these effects. An in silico miRNA target prediction approach suggests that LPIN1 could be a possible target gene of miR-27a-3p and mediate the anti-adipogenic effects of this miRNA on adipogenic differentiation.