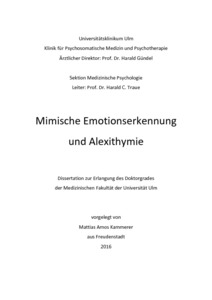 The aim of this dissertation was the assessment of possible correlations between alexithymia and the recognition of emotions in a sample of healthy subjects. Self-rated alexithymia (according to the altered factorial structure of the German version of the Toronto Alexithymia Scale – TAS-20) was correlated with objectively measured emotion recognition performance. Emotions were presented by facial expressions (Facially Expressed Emotion Labeling - FEEL) and text-based scenic descriptions of social interactions (Levels of Emotional Awareness Scale - LEAS). Objectively assessed emotion recognition (FEEL and LEAS) correlated positively with the importance of emotional introspection (TAS-20). External thinking (TAS-20) correlated negative with performance in the Levels of Emotional Awareness Scale. There was no correlation between the emotional performance tests (FEEL and LEAS) and the core of alexithymia, difficulties in identifying and describing emotions (TAS-20). Alexithymia (TAS-20 total score) is related with mental strain (GSI SCL-90-R). Another focus was on gender-specific differences in emotion recognition performance. Women performed significantly better in the Levels of Emotional Awareness Scale, in LEAS Score Self and especially in LEAS Score Other. Emotional introspection (TAS-20) was more important for the female participants and they showed less external thinking (TAS-20). In this study there was no significant correlation between self-rated alexithymia (TAS-20 total score) and deficits in the recognition of emotions shown by facial expression (FEEL).