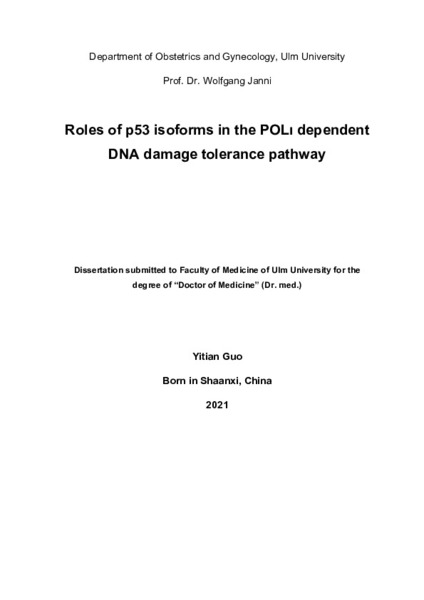 The human tumor protein p53 (TP53) gene, has been considered to play essential roles in deoxyribonucleic acid (DNA) damage responses (DDR) and DNA damage tolerance (DDT). Additionally, a new p53-Polymerase iota (POLι) dependent DDT pathway which was described in 2016 suggests that p53α is involved in promoting DNA replication fork stability by interacting with POLι to perform idling when the replication fork encounters a replication barrier to protect the fork from collapse and permit safe DNA damage bypass mediated by helicase-like transcription factor (HLTF) and Zinc Finger Ran-Binding Domain-Containing Protein 3 (ZRANB3) or, in case of persistent stress, Meiotic Recombination 11 Homolog (MRE11) dependent DNA resection. Recently, p53 isoforms have attracted more attention. By utilizing different promotors, alternative splicing and internal ribosome entry site (IRES), 12 different isoforms of the p53 can be generated whereby p53α is one of them which is usually considered full length (FL) p53. All p53 isoforms except p53α have their C-terminal or N-terminal truncated and/or replaced by alternative sequences. These isoforms have their own biological functions which might be different from p53α. Moreover, these isoforms were also found to play important roles in various cancers. Therefore, it was interesting to elucidate the roles of the p53 isoforms in the p53-POLι dependent DDT pathway as compared with p53α. Moreover, investigating how p53 isoforms affect the role of p53α in the p53-POLι dependent DDT pathway by co-expression of p53α and its isoforms, as this represents a prominent phenotype in cancer and normal cells, was even more appealing. In my MD thesis, I found that p53 C/N-terminally altered/truncated isoforms dramatically decreased the p21 induction in K562 cells without markedly affecting the constitutively high Mouse Double Minute 2 (MDM2) expression level. The transactivation activities of these isoforms were also found severely defective in Saos 2 cells as compared to p53α. Hence, p53 isoforms other than p53α were devoid of the canonical p53 functions in transcriptional transactivation in the human p53-negative cell types engaged in this study. Second, a difference in the characteristics of the proliferating cell nuclear antigen (PCNA) switchboard was noticeable in response to spontaneously generated or Mitomycin C (MMC)-induced replication barriers in the presence of different p53 isoforms other than p53α. More detailed, p53 isoforms stimulate PCNA mono/poly ubiquitination to a different extent at replication barriers, whereby C-terminally altered p53 isoforms failed to upregulate already PCNA mono-ubiquitination when ultimate replication barriers were introduced via MMC-treatment. N-terminally truncated isoforms showed a defect in PCNA poly-ubiquitination even without treatment. These changes in PCNA modification may at least in part also underlie abrogated assembly of POLι and PCNA foci in the nuclei that I noticed via immunofluorescence microscopic colocalization studies after MMC exposure. On the other hand, complex formation of p53 and POLι as well as p53 and PCNA as detected by immunoprecipitation experiments with and without chromatin crosslinking was found to be disturbed in case of the N-terminally truncated p53 isoforms. In my work I could further show that these molecular changes associated with p53 isoforms other than p53α translated into loss of replication-associated recombination, detected by a fluorescence-based assay, and failure to decelerate DNA replication at least after MMC-treatment, as monitored by DNA-fiber spreading assay. In summary, even partial loss of the oligomerization domain in case of p53β and p53γ and the N-terminal domain in case of Δ40p53α or even DNA-binding domain in case of Δ133p53α and Δ160p53α cause failure to facilitate replication-associated recombination. Strikingly, I found that the presence of other p53 isoforms inactivate the p53α-POLι dependent DDT pathway, which indicates a dominant negative effect that might attributed to hetero-oligomerization of different p53 isoforms and resembles the situation in many cancers.