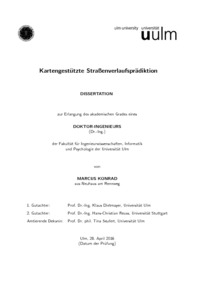 One basis for autonomous driving as well as for the evolution of semi-autonomous or driver guiding assistance systems towards autonomous driving are models of the environment. Based on these models, environmental information can be interpreted and put into relation to each other. One very important information is the road course. There are many factors dealing with different approaches for mapping and road course estimation based on different environmental sensors and methods. Here, based on this state of the art, a generic grid map is presented which can be used locally as well as on a global map. Furthermore, different kinds of data derived from measurements of different environmental sensors can also be mapped. An occupancy grid map is presented as an example. This known approach is extended by an advantageous free space function and an efficient implementation. In addition, two methods for eliminating and respectively tracking of moving objects are introduced. The insufficiencies of the Bayesian formulation of the occupancy grid map is deduced and an alternative based on the Dempster-Shafer theory of evidence is presented. As further possible realizations of the generic grid map, a video grid map and a feature grid map are defined. Based on that generic grid map, two approaches for a road course estimation are introduced. The first one extends the well known clothoid model and leads to a function description of the road course. The second one matches a digital road map to the grid map. Therefore, the absolute position and orientation of the vehicle is estimated. The forecast of the road course is an interpolation of the waypoints contained in the digital road map. Both approaches lead to similar optimization problems. For solving them, effective quality criteria are defined and a particle filter or the Levenberg-Marquardt algorithm is applied. The evaluation shows the influences of rolling and pitching for mapping, which of course, depends on the magnitude of the roll and pitch angle. The detection of moving objects in occupancy grids is analyzed as well as the accuracy of GPS measurements. Furthermore, a reusable ground truth based on an absolute mapping of road markings is created. Based on this, it is shown that the two introduced approaches for road course estimation lead to sufficient results. Using the matching between grid map and digital road map yields an estimation for greater distances with a good accuracy of the estimation of position and orientation.