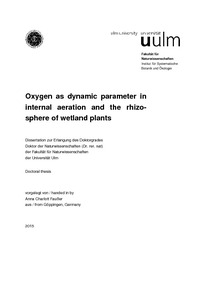 In wetland ecosystems, actively ventilating plants strongly influence the oxidation of reduced substances from anaerobic soil layers by releasing oxygen (O2) from the roots to the substrate. The objective of this thesis was to connect in-situ plant-mediated O2 transport to submerged organs with O2 usage associated with the roots. Plant-internal O2 and carbon dioxide (CO2) concentrations were measured in-situ continuously and concomitantly over several days. A greenhouse experiment was performed to reveal the influence of water vapour pressure deficit (VPD) on aeration efficiency of submerged organs and the rhizosphere. The roots were analysed for associated biofilms and aerobic methane-oxidizing bacteria (MOB). The O2 concentrations assessed inside culms and rhizomes of Phragmites australis (Cav.) Trin. ex Steud. showed active pressurization of fresh air to submerged organs. Regulation mechanisms for aerobic metabolism were assumed during times with reduced O2 supply. The observed negative correlation of plant-internal O2 to CO2 emphasizes the strong inter-dependency of plant-mediated O2 supply and O2 consuming processes in the rhizosphere. Changing of VPD influenced the aeration patterns of rhizomes and rhizospheres of Typha angustifolia L. strongly. This effect is assumed to be induced by stomatal narrowing in response to increasing VPD in the surrounding atmosphere. Dense biofilms were detected on the roots of P. australis and T. latifolia L.. The proportions of MOB were higher than one third of total biofilm bacteria which demonstrates that the rhizosphere is highly influenced by methane diffusing from anaerobic soil layers. The present study confirms that the combined assessment of plant-internal O2 and CO2 concentrations can be used to estimate O2 supply to and O2 consumption in wetland soils. The large number of root-associated MOB indicates the high potential of methane consumption mediated through plants in wetland ecosystems.