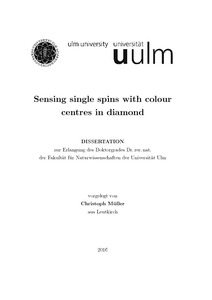 This thesis reports on recent progress in magnetometry based on the negatively charged nitrogen-vacancy colour centre in diamond. The main focus is thereby the detection of single external nuclear spins. The nitrogen-vacancy (NV) centre is a point defect in diamond, consisting of a substitutional nitrogen atom and an adjacent vacancy in the diamond lattice. Its electronic spin state can be initialised and read out by means of green laser light and coherently manipulated by microwave irradiation. Additionally, it possesses long coherence times even at room temperature. During the last decade the NV centre attracted attention as a high-sensitivity nanoscale NMR sensor. In this work, improvements in the sensitivity are shown, leading to detection volumes down to 8nm³, where the detected signal was evoked by around 20 statistically polarised hydrogen spins. In the so-called strong coupling regime, where the interaction between NV sensor and sample spins is the most dominant one, we located individual Si-29 nuclear spins with sub-nanometre resolution and obtained single nuclear spin sensitivity within seconds. In addition, the surface noise experienced by shallow NV centres is probed and efficient decoupling from the noise is demonstrated, which allowed to obtain longer coherence times and therefore a better spectral resolution of the NV sensor. In a further experiment, the successful creation of a strongly coupled pair of NV centres is shown. This is an important step towards arrays of strongly coupled NV centres, which in the end may act as a quantum computer.