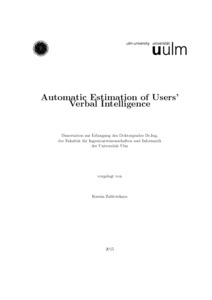 The purpose of our research is the development of algorithms for the automatic estimation of the verbal intelligence of individuals - in other words the level of verbal cognitive processes - based on the analysis of transcribed spoken utterances. There are many psychological research studies which show that certain language peculiarities may reflect psychological and emotional states of a speaker, his age, gender, social class, etc. In this work we investigate how speakers with different verbal intelligence interact with each other, which vocabulary they use, how they construct their sentences, what the peculiarities of their speech style are and how this information may be used for automatic determining of the verbal intelligence of speakers. To our knowledge, this is the first report of experiments attempting to automatically predict verbal intelligence. In our opinion, this research is necessary to develop an exact companion system technology in human-machine interaction. We are aware of the critical ethical issue of this technology, but only when a companion system recognizes the verbal ability of a user, it can precisely adapt to the user specific strategies. Future dialogue systems may use information about the estimated cognitive processes of a user and change the level of the interaction, make the interaction for a non-experienced user easier and clearer, and may help the user solve different problems more effectively. The work is based on a corpus that was collected at the University of Ulm, Germany. 100 native German speakers participated in this study. As a result, the corpus contains 100 descriptions of a short film (monologues) and 56 discussions about the same topic (dialogues) and verbal intelligence scores of the speakers that were obtained using the Hamburg Wechsler Intelligence Test for Adults. To investigate differences in the language use of speakers with different verbal intelligence, their monologues were analysed at different linguistic levels (morphological, lexical, syntactic and semantic) and compared with the film transcript. The speech style of the test persons and their vocabulary were also investigated. All the extracted features were compared with the verbal intelligence scores of the experiment participants in order to find the most informative features that reflect verbal intelligence behaviour of individuals and may be used for further investigations. For the classification task, two main approaches were applied. In the first approach, the extracted linguistic features were used to classify the test persons into several groups. Such feature selection methods as the information gain ratio, V2-Test and genetic algorithm were used. The naive Bayes, k-nearest neighbours and support vector machines were trained using different combinations of linguistic features. In the second approach, the text files were represented as feature vectors using the TF-IDF weighting scheme. The naive Bayes, k-nearest neighbours and Rocchio classifiers were trained using the leave-one-out cross validation approach. The achieved classification accuracy can be deemed as satisfactory for a number of classes that is reasonably high enough to enable its integration into SDSs. The same approaches (linguistic analysis, usage of the most informative features for the classification, and representation of text files as feature vectors) were applied to the dialogues. It should be noted that the automatic verbal intelligence estimation of speakers using their dialogue transcripts is a more challenging task than working with monologues. When engaged in a conversation, dialogue partners usually try to adapt to each other and automatically change their choice of words, speech style, etc. For example, when an adult with a certain level of verbal intelligence talks to his child, his words and sentence structures are easier than those he uses when he talks to his friends or colleagues. As a result, for estimating the verbal intelligence of dialogue participants, the level of their conversation should be taken into account. The ability of individuals to adapt to their dialogue partners was analysed using such methods as social networks, language style matching analysis, dominance estimation, etc. The obtained information was used to determine the best strategy of automatic verbal intelligence estimation.