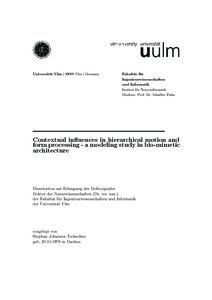 Processing of visual sensory input is mainly determined by filtering mechanisms to detect the presence of certain features and generate proper representations. Such features can be derived over several stages of hierarchical processing to extract increasingly more complex feature compositions characteristic of the input signal. However, context information often determines the interpretation of localized feature responses, such that, e.g., an individual item presented as part of a texture appears different from a presentation in isolation or in contrast to surrounding items. In this thesis, such contextual influences in the visual processing of form and motion information are presented and their generation is explained within a model neural architecture. The thesis details how such context information changes the gain of feature representation by up- and down-modulating the activation in distributed feature representations. The modeling investigates a bio-mimetic architecture of event-based sensor input from a Dynamic Vision Sensor (DVS). It is demonstrated that local filtering generates initial motion representations where competitive mechanisms of pool normalization and modulating feedback redistribute local responses to emphasize moving features, reducing the uncertainty for the motion aperture effect and improving the signal to noise ratio of sensory input data. The work shows how benefit is taken from the high temporal resolution of the sensor and how a representation of motion streaks is achieved along the ventral pathway. In a hierarchical model of form processing we present mechanisms of perceptual organization that aggregate localized items into a meaningful representation of static scene content. With the use of complex hierarchical feedforward and feedback connections, contextual information about a contour is made available to lower regions. It is shown how labeling of figure-ground direction of boundaries is achieved by tagging using activities of competitive interactions that are biased by top-down enhancement from higher stages.