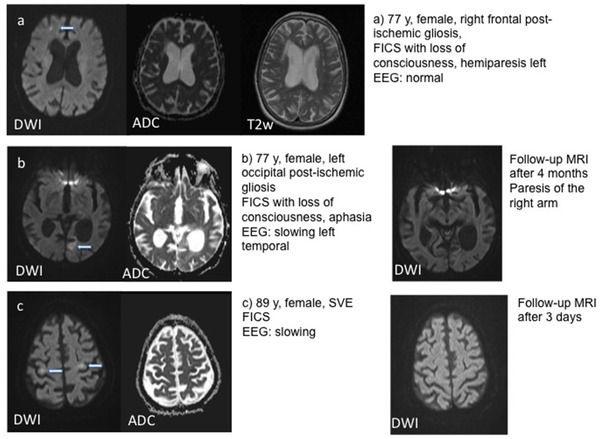 Background: Changes of cerebral diffusivity detected by magnetic resonance imaging (MRI) have been reported in epilepsy. Diffusion weighted imaging (DWI) detects changes in the distribution of water molecules by measuring the apparent diffusion coefficient (ADC) and is mainly used in the diagnosis of ischemic stroke. DWI changes in epilepsy were reported in status epilepticus (SE) or series of seizures. It remains unclear whether this phenomenon also occurs after single seizures. Accordingly, possible pathomechanisms have only been discussed on the presumed basis of ongoing epileptic brain activity. Methods: In this retrospective study, we systematically analyzed DWI alterations related to epileptic seizures in 454 patients who received MRI scanning within the first 24 h after seizure onset. Results: DWI restrictions not classified as ischemic stroke were observed in 18 patients (4%). We found DWI restrictions in 19% of patients with SE/seizure series and in 3% of patients after single focal and 2.5% after single generalized seizures. 17 patients with DWI alterations were diagnosed with a structural epilepsy. DWI signal decreased in the majority of patients within the first days and could not be detected in follow-up imaging >3 months. In all patients except one, DWI alterations were detected in the same hemisphere as the lesion. In the case of seizure series or SE, DWI restrictions mostly presented with a typical “garland-like” pattern alongside the cortical band or on the border of a defined lesion, while in isolated seizures, the restrictions were often rather subtle and small. Discussion: We show that DWI restrictions can be observed in patients after single epileptic seizures. As the vast majority of these patients was diagnosed with an epilepsy due to structural cerebral pathology, DWI restriction may reflect a higher vulnerability in these regions. This might also explain the fact that diffusivity changes were observed after single focal seizures as well as after multiple seizures or SE. The occurence itself on one side as well as the spatial pattern of this phenomenon on the other may thus not only be related to the duration of ictal activity, but to structural pathology.