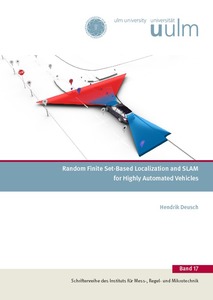 The majority of research efforts in the automotive community is currently focused on alternative fuel vehicles and highly automated driving. The development of highly automated vehicles is not only promoted by Original Equipment Manufacturers (OEMs) and automotive suppliers, but especially by well-known IT companies (e.g., Google and NVIDIA). That alone is an indicator for the potential of this direction of research. Despite these combined efforts, highly automated driving will not be available on arbitrary roads in the foreseeable future. This would require an actual understanding of complex driving situations at a level that is currently not possible to implement on computers. Typically, very detailed maps are used in order to still allow for highly automated driving. These maps provide plenty of information about the stationary vehicular environment that could not be detected with equivalent accuracy relying on sensors only. Furthermore, using detailed maps instead of trying to calculate everything online signiﬁcantly reduces computational cost. However, the exact pose of the vehicle relative to such a map is a mandatory prerequisite in order to facilitate a sensible usage of this source of information. This thesis presents a localization method for highly automated vehicles that are equipped with close-to-market sensors. This localization method is based on the well known Monte Carlo Localization (MCL) algorithm, i.e., in this case the feature-based estimation of the vehicle’s pose using a particle ﬁlter. When using MCL, two aspects are of major importance for reaching good performance: The features and the function that is used to determine the particle weights. Features that are especially suitable for the localization of a highly automated vehicle are described within this thesis. These features are provided by different sensors in order to reach a certain degree of redundancy which is deﬁnitely needed for safety relevant systems such as highly automated vehicles. The function that is used for determining the particle weights is inspired by Random Finite Set (RFS) Theory which has also been the cornerstone of recent progress in multi-object tracking. Using RFSs to represent the set of measurements and the set of mapped landmarks allows for a mathematically sound method to describe the similarity between those sets, thereby also considering measurement statistics (detection probability, false alarm rate). The proposed localization approach has been utilized successfully during public demonstrations of the highly automated vehicle of the Institute of Measurement, Control and Microtechnology at Ulm University, Germany. The second part of this thesis presents a novel approach to Simultaneous Localization And Mapping (SLAM). SLAM algorithms have the potential to facilitate generating and updating landmark maps with any vehicle that is capable of detecting the respective landmarks. Currently, only vehicles that are equipped with expensive reference systems can be used for this purpose. The proposed SLAM approach is based on RFS theory as well: Each particle of a Rao-Blackwellized particle ﬁlter uses a Labeled Multi-Bernoulli ﬁlter to estimate the map of landmarks (RB-LMB-SLAM). It is demonstrated by means of simulation that – in cases of high clutter rates – the RB-LMB-SLAM approach outperforms the RB-PHD-SLAM which is well known for its performance in this kind of scenario.