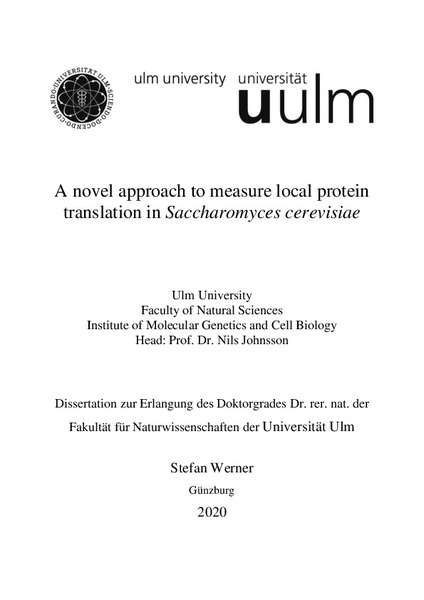 In this thesis I present the Ubi-Trap system for temporal and spatial analysis of protein synthesis in living yeast cells. Protein localization in living cells is typically investigated by fusion with the autofluorescent protein GFP. However, since it takes several minutes for GFP to mature into its fluorescent state, this method cannot provide information about the first few minutes of the proteins lifetime. As most proteins arrive their destination after seconds or minutes, the location where the protein was formed by translation of a mRNA is not accessible. In order to be able to investigate this "blind spot", I have developed the Ubi-Trap method in which the immature GFP molecule is held near the site of its synthesis until it begins to fluoresce and is accessible to fluorescence microscopy. This was achieved by introducing a ubiquitin molecule in frame of the POI-GFP and coexpression of a GFP binding protein. With this system I have studied the synthesis of different proteins. First, I could show that Ash1 is synthesized in daughter cells during cytokinesis. This is exactly as expected, as in previous works, it has been shown that the ASH1 mRNA is formed in the M phase of the cell cycle and is brought to the tip of the daughter cell by active transport. The transport is ensured by the components of the SHE signaling pathway. Once in the tip of the daughter cell, the mRNA is translated into protein. I was able to show that this happens not only at the tip, but everywhere in the daughter cell. A mutation that aborts polar transport of ASH1 mRNA shows symmetrical protein synthesis in the mother and daughter cell. I then used the Ubi-Trap system to analyze the synthesis of the less well studied Wsc2 protein. The respective mRNA is also transported into the bud, but, unlike Ash1, the distribution of the protein is independent of the mRNA transport. I could show that in wildtype cells Wsc2 is mainly translated at the cortical endoplasmic reticulum of the bud. This is altered in mutants with disturbed mRNA transport, where Wsc2 is equally synthesized in both, mother and bud. In contrast, I could show that the related protein Wsc3 is synthesized in equal amounts in mother and daughter cells and that this synthesis is not limited to the cortical endoplasmic reticulum. The results show that the Ubi-Trap system is suitable to detect protein synthesis in living cells. By small changes in the system, spatial resolution can be improved in the future. The system can also be used to study a variety of other substrates and is not limited to yeast cells.