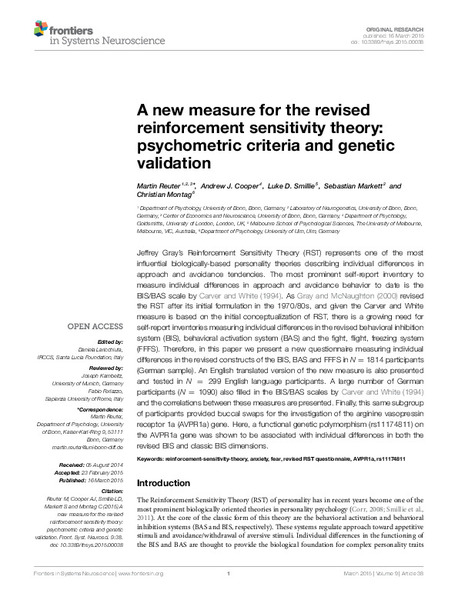 Jeffrey Gray's Reinforcement Sensitivity Theory (RST) represents one of the most influential biologically-based personality theories describing individual differences in approach and avoidance tendencies. The most prominent self-report inventory to measure individual differences in approach and avoidance behavior to date is the BIS/BAS scale by Carver and White (1994). As Gray and McNaughton (2000) revised the RST after its initial formulation in the 1970/80s, and given the Carver and White measure is based on the initial conceptualization of RST, there is a growing need for self-report inventories measuring individual differences in the revised behavioral inhibition system (BIS), behavioral activation system (BAS) and the fight, flight, freezing system (FFFS). Therefore, in this paper we present a new questionnaire measuring individual differences in the revised constructs of the BIS, BAS and FFFS in N = 1814 participants (German sample). An English translated version of the new measure is also presented and tested in N = 299 English language participants. A large number of German participants (N = 1090) also filled in the BIS/BAS scales by Carver and White (1994) and the correlations between these measures are presented. Finally, this same subgroup of participants provided buccal swaps for the investigation of the arginine vasopressin receptor 1a (AVPR1a) gene. Here, a functional genetic polymorphism (rs11174811) on the AVPR1a gene was shown to be associated with individual differences in both the revised BIS and classic BIS dimensions.