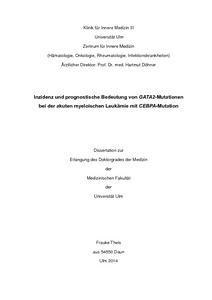 Mutations in the CCAAT/enhancer-binding-protein-alpha gene (CEBPAmut) mainly occur in acute myeloid leukemia (AML) with normal cytogenetics, and approximately 60% of the mutated patients (pts) carry biallelic mutations (CEBPAbi). Several studies showed that CEBPAbi is associated with a favorable outcome compared to single mutations (CEBPAsm) or CEBPA wildtype pts. Recently, mutations in the transcription factor GATA2 (GATA2mut) were identified as potentially cooperating genetic lesions. Aims: To evaluate the frequency and the clinical impact of GATA2mut within a large cohort of CEBPAmut AML pts. Methods: 202 AML pts (age 18 to 78) with CEBPAsm (n=89) or CEBPAbi (n=113) were analyzed for the presence of GATA2mut. Results: GATA2mut were restricted to the cytogenetic intermediate-risk group; in total we detected 42 heterozygous GATA2mut in 40 of the 202 pts (20.7%); 36 pts had CEBPAbi (36/113, 31.8%), 4 CEBPAsm (4/89, 4.4%). For the whole cohort GATA2mut pts showed lower frequency of concurrent NPM1, FLT3-ITD, DNMT3A or RUNX1 gene mutations. There were no significant clinical features characterizing the CEBPAmut/GATA2mut genotype. With regard to the clinical endpoints overall (OS), event-free (EFS), relapse-free (RFS) survival or the cumulative incidence of relapse (CIR) there were no differences between the GATA2mut and GATA2 wildtype (GATA2wt) pts. When focusing on the subgroup of CEBPAbi pts (n=113), GATA2mut again had no impact on these endpoints. Finally, we evaluated the impact of GATA2mut in the subgroup of CEBPAbi pts <60 years with intermediate-risk cytogenetics (n=94) but did not see any impact on OS, EFS, RFS or CIR. Conclusions: In our study on a large cohort of CEBPAmut AML pts we confirmed the high coincidence of GATA2mut, in particular in the subgroup of pts with CEBPAbi. However, in our study GATA2mut had no impact on clinical outcome neither in the whole cohort nor in distinct pt subgroups.