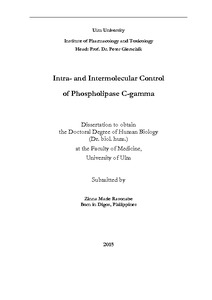 The two isoforms of phospholipase C-gamma (PLCg), PLCg1 and PLCg2, play a critical role in signal transduction and diverse modes of controlling activities of PLCg isozymes have been uncovered. A split-PH domain exists in both PLCg isozymes in which its isolated N-terminal half (PHn) and the C-terminal half (PHc) assemble and fold into a complete PH domain structure. There are already reports demonstrating the interactions of the split-PH halves (PHn or PHc) of PLCg with other proteins and its functional significance, but the dynamics of its structures and functions still remains vague. In this work, Fluorescence Correlation Spectroscopy (FCS) evaluations show that PHn or PHnPHc interact with PLCg suggesting that these isolated fragments possibly associate with the other complementary half (PHc or PHn) of the known sp-PH present in PLCg. It seems that in the context of the full-length enzyme, intra- or inter-molecular interactions of spPH domain exist. Interestingly, there is also emerging evidence of the control of PLC isozymes by the Rho GTPase RhoH. Our initial data demonstrate that RhoH markedly inhibits the activity of PLCg2; however, the structural requirements for RhoH inhibitory function are not yet defined. Mutational analyses of this study using PLCg2 and RhoH mutants reveal that neither the N-terminal nor the internal split-PH domain of PLCg2 are potential interaction sites of RhoH. Importantly, the C-terminal region of RhoH consisting of polybasic region (PBR) and CAAX motif, known to facilitate membrane localization and interaction of effectors, are required for its inhibitory effect.