Subjective disease burden due to cognitive and behavioural impairment in amyotrophic lateral sclerosis, frontotemporal dementia and Parkinson’s disease : a comparison 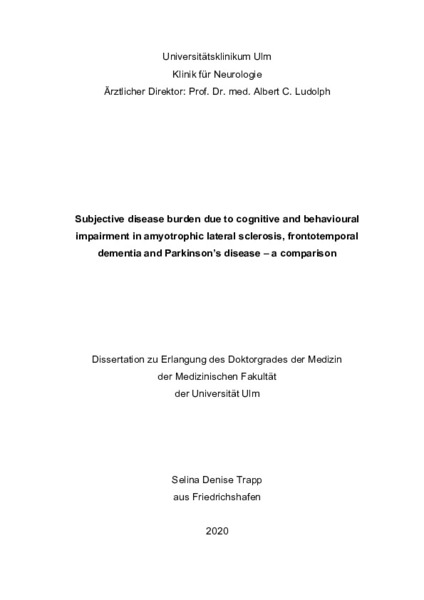 Objective The influence of cognitive and behavioural impairments and disease insight on subjective burden [sTBS] in amyotrophic lateral sclerosis [ALS], idiopathic Parkinson’s disease [IPS] and frontotemporal dementia [FTD] has never been compared before in one collective study. Aim This cross-sectional study investigates the disease burden of ALS, IPS and FTD patients by evaluating the Quality of Life [QoL] and affective state as measures of psychosocial adaptation to cognitive and behavioural impairments, while taking disease insight into account. Methods In a prospective design, cognitive and behavioral impairments of 40 ALS, 40 IPS and 17 FTD patients and the ratings of 31 ALS-, 30 IPS- and 16 FTD-caregivers were assessed to compare disease burden and disease insight. Cognition was measured with the Edinburgh cognitive and behavioral screen [ECAS] and mini mental state examination [MMST]. Behavioural impairments were estimated by a caregiver with the ECAS behavioural questionnaire. QoL was evaluated with the schedule for the evaluation of individual QoL [SEIQoL], anamnestic comparative self-assessment [ACSA] and health related QoL with short form 12 [SF 12]. Affect was measured with ALS depression inventory 12 [ADI 12]. The disease burden questionnaire had a self-assessed [sTBS] and a caregiver-assessed [cTBS] version for the patients’ burden. To determine disease insight, we evaluated the discrepancy between sTBS and cTBS. Results All three groups maintained a relatively good QoL and affective state. The ALS group had the lowest physical HRQoL but still a good mental QoL, followed by the IPS group. In both, the IPS and ALS groups, cognitive impairments significantly positively correlated with the sTBS. Solely in the IPS group, cognitive impairments, physical impairment and longer disease duration significantly correlated with increased depressive symptoms and a lower QoL. Physical impairment and disease duration also significantly positively correlated with sTBS in the IPS group. Despite the FTD group scoring the highest burden in sTBS and cTBS, their discrepancy between these two scores was the greatest. The caregiver estimated scores, usually rated the FTD patients’ burden even higher, than their self-assessed questionnaire. Apart from indicating an unexpectedly high burden for the FTD patients, this also indicates a significantly lower level of disease insight, compared to the ALS and IPS groups. In IPS and FTD, family significantly influenced sTBS. Conclusion The FTD group displayed the highest sTBS, whereas in the ALS and IPS groups it was in a similar range. The FTD group had the lowest level of disease insight, whereas the ALS and IPS groups had a good disease insight. ALS patients showed good QoL, despite that cognitive deficits influenced the sTBS, indicating a good psychosocial adaptation. IPS patients showed a comparatively insufficient psychosocial adaptation, as cognitive deficits, physical impairment and long disease duration were associated with a low QoL and more depressive symptoms. Social support positively influenced burden especially in IPS and FTD groups and thus should be promoted in a holistic therapy approach. Caregivers should be educated about the lack of insight in FTD patients, in an attempt to raise empathy and increase social support. Outlook Research on disease burden and disease insight, especially longitudinal studies may further promote our understanding of interacting factors and causalities.