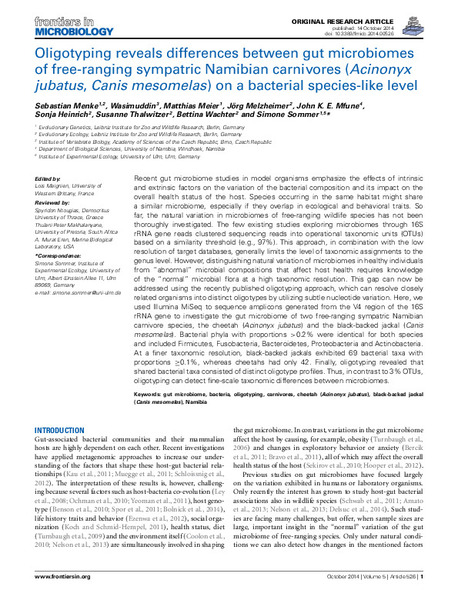 Recent gut microbiome studies in model organisms emphasize the effects of intrinsic and extrinsic factors on the variation of the bacterial composition and its impact on the overall health status of the host. Species occurring in the same habitat might share a similar microbiome, especially if they overlap in ecological and behavioral traits. So far, the natural variation in microbiomes of free-ranging wildlife species has not been thoroughly investigated. The few existing studies exploring microbiomes through 16S rRNA gene reads clustered sequencing reads into operational taxonomic units (OTUs) based on a similarity threshold (e.g., 97%). This approach, in combination with the low resolution of target databases, generally limits the level of taxonomic assignments to the genus level. However, distinguishing natural variation of microbiomes in healthy individuals from “abnormal” microbial compositions that affect host health requires knowledge of the “normal” microbial flora at a high taxonomic resolution. This gap can now be addressed using the recently published oligotyping approach, which can resolve closely related organisms into distinct oligotypes by utilizing subtle nucleotide variation. Here, we used Illumina MiSeq to sequence amplicons generated from the V4 region of the 16S rRNA gene to investigate the gut microbiome of two free-ranging sympatric Namibian carnivore species, the cheetah (Acinonyx jubatus) and the black-backed jackal (Canis mesomelas). Bacterial phyla with proportions >0.2% were identical for both species and included Firmicutes, Fusobacteria, Bacteroidetes, Proteobacteria and Actinobacteria. At a finer taxonomic resolution, black-backed jackals exhibited 69 bacterial taxa with proportions ≥0.1%, whereas cheetahs had only 42. Finally, oligotyping revealed that shared bacterial taxa consisted of distinct oligotype profiles. Thus, in contrast to 3% OTUs, oligotyping can detect fine-scale taxonomic differences between microbiomes.