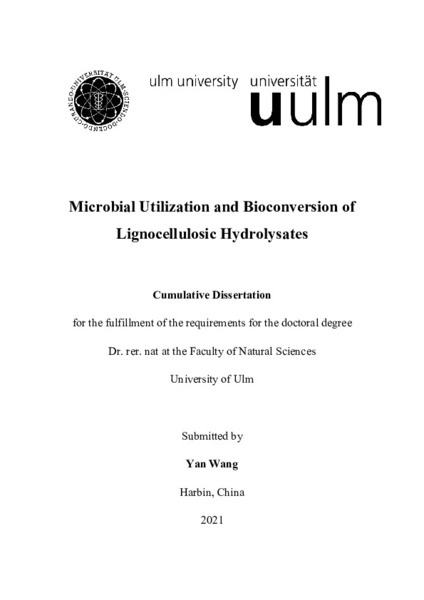 Lignocellulosic biomass is the most abundant bio-resource on earth containing carbohydrates polymers cellulose, hemicellulose and lignin. With a number of methods including pretreatment and hydrolysis, lignocellulose-derived hydrolysates containing D-glucose, D-xylose, L-arabinose, and further sugars can be obtained. The hydrolysates consisting fermentable sugars typically display a high degree of variation depending on both the biomass source materials and process conditions, resulting in different compositions such as various concentrations of monosaccharide sugars and inhibitors. The fermentable sugars in lignocellulosic hydrolysates have attracted many people’s attention all over the world, because these fermentable sugars have a great potential to be used by microorganisms as a sole carbon source for the growth and production of bioproducts. To date, several bioproducts such as biofuels, chemicals and many high value-added products have been already investigated and produced, and the application field is still expanding. However, one of the key obstacles is that not all the microorganisms have the ability to metabolize all the different sugars in hydrolysates. Most of the known microorganisms only utilize D-glucose as the sole carbon source, which results in the energy loss of lignocellulosic biomass. Another obstacle is that the inhibitors formed during hydrolysis, limit the efficient usage of hydrolysates as a carbon source for biotechnological conversion. To further investigate and overcome these obstacles, in this Ph.D. thesis, the following research works have been examined and summarized: 1) Investigation the sugar utilization of Escherichia coli strains and the production of αs1-casein proteins based on lignocellulosic hydrolysates. 2) Metabolic engineering of Pseudomonas putida KT2440 as microbial biocatalyst for the utilization of D-xylose and L-arabinose. 3) Evaluation of different lignocellulosic hydrolysates as substrates for engineered P. putida KT2440 and the inhibitory effectiveness on P. putida KT2440.