Investigation of motor and olfactory dysfunction in genetic and non-genetic animal models of Parkinson’s disease: implications for translational research in medicine 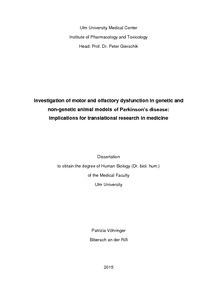 Parkinson’s disease (PD) is a progressive neurodegenerative disorder which manifests with a broad range of symptoms including motor and non-motor disturbances. The development of neuroprotective and disease-modifying drugs requires the presence of reliable biomarkers to monitor disease progression and to identify potential treatment effects. Furthermore, reliable animal models of PD recapitulating the human disease condition with high validity are urgently needed. Based on pharmacokinetic, neurochemical and behavioural observations, the symptomatic PD models of haloperidol-induced catalepsy in rats and reserpine-induced akinesia in mice have been modified. Interventions such as changing the route of administration of haloperidol as well as decreasing the dose of reserpine, reducing the latency time after reserpine injection and lowering the portion of acetic acid in the reserpine vehicle solution resulted in animal models of high predictive and face validity as well as enhanced animal welfare. The concept of continuous dopaminergic stimulation (CDS) was evaluated in the haloperidol-induced catalepsy as well as reserpine-induced akinesia model in rats. It has been shown that continuous dopamine (DA) receptor stimulation using pramipexole (PPX) offered a clear therapeutic benefit compared to acute PPX treatment regarding early morning akinesia. The behavioural effects corresponded to in vivo microdialysis measurements in the striatum of rats showing a continuous decrease of extracellular DA levels and a constant PPX exposure following continuous PPX release. Amantadine is the most commonly used drug to alleviate L-3,4-dihydroxyphenylalanine (L-DOPA)-induced dyskinesia in PD patients. Amantadine was investigated in the L-DOPA-induced dyskinesia as well as haloperidol-induced catalepsy model in rats. It has been demonstrated that high cerebrospinal fluid (CSF) levels of amantadine in a µmolar range were necessary to achieve antidyskinetic and anticataleptic efficacy in rats. This high CSF exposure in rats translated well into clinically effective CSF levels, highlighting the importance to combine CSF exposure measurements and behavioural observations to better bridge the gap between preclinical and clinical effects of amantadine. Olfactory dysfunction, one of the first non-motor symptoms of PD, was evaluated as an early biomarker in a genetic adeno-associated virus (AAV)-based rat model of PD. It has been shown that AAV-mediated overexpression of human wild-type α-synuclein (α-syn) in the bulbus olfactorius (BO) of rats led to olfactory disturbances, measured by the buried food pellet test, which were detectable three weeks after viral vector injection and persisted at nine weeks. Moreover, α-syn was transported to deeper located brain regions resulting in striatal DA depletion 11 weeks after viral vector injection. These findings underpin the important role of olfactory dysfunction to be a premotor biomarker which reflects PD pathogenesis at early stages of the disease and can be used to follow PD progression. γ-aminobutyric acid (GABA), glutamate as well as glycine are important amino acid neurotransmitters and their measurement in CSF and brain microdialysis samples is of great interest to neuropharmacological and biomarker studies, making an accurate, precise and fast quantification essential. A rapid and reliable liquid chromatography tandem mass spectrometry (LC-MS/MS) method was developed for the quantification of GABA and glutamate in brain microdialysates. The method provided high sensitivity and selectivity, no sample pre-treatment and a short running time of 3 min. A limit of quantitation (LOQ) of 1 nmol/l for GABA and 10 nmol/l for glutamate was achieved, which was sensitive to quantify extracellular levels of GABA and glutamate in microdialysis samples of the globus pallidus (GP). Another fast and reliable LC-MS/MS method was established for the quantification of glycine in CSF and brain microdialysis samples. This novel method showed similar advantages such as no sample pre-treatment and a short running time. The procedure achieved a LOQ of 100 nmol/l, which was sensitive for the quantification of glycine in CSF samples and brain microdialysates. In conclusion, the present work demonstrates the face and predictive validity of PD animal models investigating symptoms such as catalepsy, akinesia or dyskinesia and evaluating PPX and amantadine as antiparkinsonian and antidyskinetic drugs. The AAV-α-syn-overexpression model recapitulating olfactory dysfunction as a premotor biomarker for progressive PD may provide a valuable tool for screening neuroprotective and disease-modifying therapies in the early premotor phase of PD. In order to support biomarker studies investigating GABA, glutamate and glycine, the rapid and sensitive LC-MS/MS methods can be used for the quantification of these compounds in brain microdialysis and CSF samples.