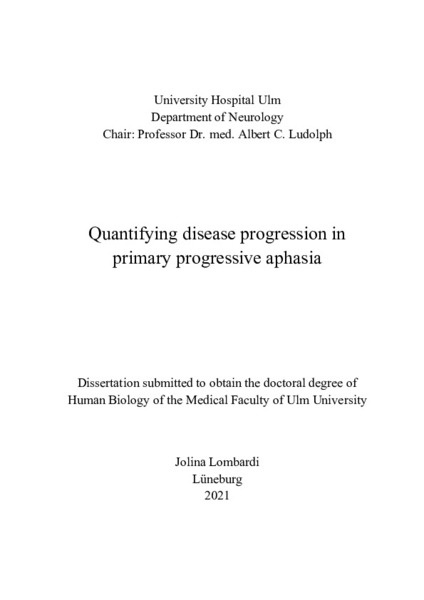 The present study examined disease progression in primary progressive aphasia (PPA), a rare neurodegenerative disease characterized by substantial and increasing language impairments. According to the current diagnostic criteria, three phenotypes are identified: the non-fluent variant, the semantic variant, and the logopenic variant. Specific clinical features are often correlated with neuroimaging-based biomarkers, suggesting particular neurodegenerative patterns for each subtype. The neuropsychological examination is a crucial part of the diagnosis and tracking of primary progressive aphasia, but increasing language impairments and the additional decline in general cognitive functioning with progressive dementia make it challenging to evaluate disease progression. A promising parameter is the volumetric examination of the brain. Several studies have examined the pathological changes in PPA; however, probably due to its low prevalence, a detailed analysis that quantifies and locates disease progression in each subset of primary progressive aphasia in early and later stages is missing so far. Reliable quantification measures and a comprehensive understanding of neuropathological disease progression is however essential to assess the effect of therapeutic approaches. This study aimed to characterize each of the primary progressive aphasia variants in comparison with healthy controls at first presentation at medical services and at the 1- and 2-year follow-up measurement. Structural MRI data were examined with a comprehensive atlas-based volumetric approach allowing for cross-sectional and longitudinal disease tracking in 56 cortical and subcortical areas and for both, gray and white matter changes. The results identified the most vulnerable brain regions for each variant and allowed calculation of sample sizes for follow-ups at one and two years to detect potential therapeutic effects reliably. Findings indicate, that at baseline, all primary progressive aphasia subgroups already differed significantly from healthy controls, with most pronounced volume reduction in the left ventrolateral prefrontal area for the non-fluent variant, the left temporal lobe and hippocampus/amygdala complex for the semantic variant, and the left temporal and temporoparietal region for the logopenic variant. Follow-up measurements after one year and two years revealed further atrophy progression in primarily affected areas in the non-fluent and semantic variants and a more widespread pattern in the logopenic phenotype. In the non-fluent variant, disease progression occurred most prominently in the bilateral frontal lobes with extensions to parts of the temporal, parietal, and occipital lobes. Particularly in this subtype, gray and white matter decreases diverged, pointing to a variant-specific spreading of pathology. In the semantic variant, brain atrophy was more pronounced at baseline and also at follow-up measurements compared with both other variants. Disease progression displayed a pronounced focal atrophy pattern mainly affecting lateral and medial temporal regions bilaterally with extensions to (medial) frontal and parietal regions. In lvPPA, atrophy occurred mainly left-lateral and to similar extents across all lobes and with diffuse but especially increasing frontal involvement with time. Atrophy patterns overlapped with relevant structures of the other two primary progressive aphasia variants and also with the relevant structures affected in young-onset Alzheimer’s disease. In all variants, left lateralized atrophy was more pronounced at baseline and at follow-up measurements. Overall, higher gray than white matter atrophy appeared in the semantic and logopenic variant but not in the non-fluent subgroup. Based on longitudinal volume change, calculations identified the most vulnerable and thus most sensitive regions per variant as a read-out for therapeutic approaches: On a single-group level, inferior frontal, superior temporal and subcortical structures were most suitable for the non-fluent variant. For the semantic and logopenic variant, temporal gyri and the hippocampus/amygdala complex were best suited to measure modifications. Across all groups, cohort sizes of n=30 per variant would be sufficient to identify a therapeutic effect of 50% at the 1-year follow-up visit, which is expected to be feasible for most double-blind therapeutic trials that promise a high effect. In sum, this study is the first to examine disease progression in all three variants of primary progressive aphasia by using consistent longitudinal follow-up measurements and an evidence-based, comprehensive analysis of the whole brain without a priori defined regions.